Buy Now Before Everyone Else

Halliburton laid off 1,000 workers in its Eastern Hemisphere division on Friday.

Many assume oil prices have the multi-national conglomerate spooked that it will need to cut its prices or face non-payment by oil drillers.

Several Energy and Capital readers have emailed us expressing similar concern for their own oil investments.

Most queries sound something like this one from Beth in New Hampshire: "I've been putting money into Continental for the last two years, do you think I should cut my losses?"

In short, the answer is no.

We aren't ready to lay off oil investing altogether. But we do suggest another path if you're afraid of oil right now...

After an unseasonably warm December for most of the U.S., analysts lowered expectations for gas demand at least until the New Year. 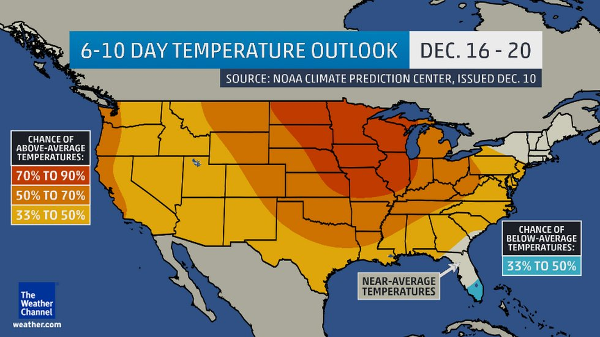 As you can see, the National Oceanic and Atmospheric Administration predicts higher-than-average temperatures for most of the U.S. These higher temperatures create less demand from households for natural gas heat.

So is there nowhere energy investors can look right now?

The answer may seem like a no, but most analysts missed one key figure that has created a certain opportunity...

We Will Consume More Gas

Look, I know I can't really be certain about what's going to happen — especially in the markets — but based on good old-fashioned economics and some important data, we have as close to a sure thing as I think we can get.

According to an overlooked figure, during the beginning of December, the U.S. had about 10% less natural gas in storage than it normally does and 5% less than last year, when temperatures were reaching record lows.

This means that despite our record-low withdrawal, the U.S. still can't keep up with natural gas demand.

We are simply consuming more than we have, and that means come January, February, and March, gas investments will get a short-term boost when the price goes up.

I mean, just look at what happened earlier this year... 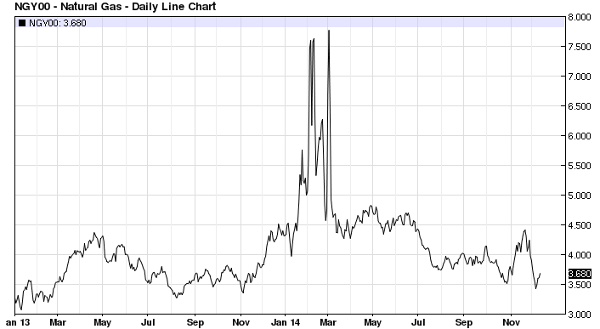 I know this was an anomaly because of unusually cold weather, but even if it doesn't get as cold this year, we have less gas available to cover our needs.

So expect to see a healthy bump come the first quarter of 2015.

How About Long Term?

To be honest, we expect this pattern of underserved gas storage to continue for a while.

We might be able to resupply our storage better next year, but we will be drawing more from it more frequently.

By the end of next year, Cheniere Energy (NYSE: LNG) will be liquefying and exporting natural gas. A few years after that, several other companies will join it.

Barring any new legislation against it, next summer, the EPA will be enforcing stricter rules on carbon emissions that will force many coal-fired plants to close up shop, thus increasing the need for less carbon-intensive natural gas power.

And there are over 215 projects totaling $133 billion in investment for the petrochemical industry that use cheap natural gas to make everything from fertilizer to plastics.

When these projects move forward and demand more gas, the capacity to keep our storage full every winter will become an ever more daunting task.

The best available way to keep up with growing demand for cheap natural gas will come from new technologies and initiatives meant to waste less of it.

See, when oil producers — especially in the Bakken — drill for oil, they must release pressurized gas or risk a blowout. This means a lot of gas is wasted and burned off into the atmosphere when it could be sold on the market for a profit.

Unfortunately, there still isn't any proper infrastructure in place to make this happen.

But there are companies on the cutting edge, solving this problem as we speak with everything from small-scale fuel plants to massive gathering facilities.

Over the next couple of weeks, we'll be bringing you our recommendations for potential investments in this space. Stay tuned.