Nasdaq had a great year. By my calculations, it was up 47%. 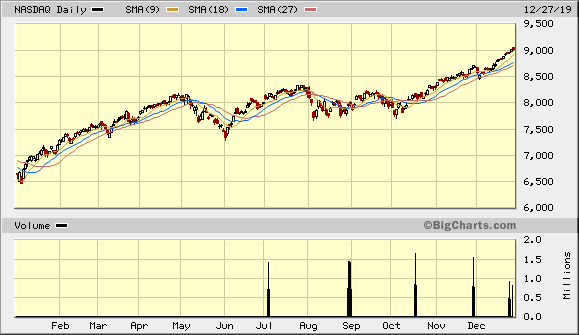 The Nasdaq is a weighted index with the top five companies, Apple, Microsoft, Amazon, Alphabet, and Facebook, making up 36% of the index’s value.

AMD makes microchips, of course, and that has been the sector to own over the past 10 years, as internet-connected devices and the emergence of cloud storage networks drove demand.

The tri-directional indicator suggests that the trend is still up, but we are ahead of ourselves a little bit.

Fat Finger of the Fed

Of course, a lot of those gains are a direct result of the Federal Reserve pumping money into the market.

In 2018, when the Fed was raising interest rates, the stock market sold off.

In 2019, the Fed got scared based on a global slowdown and inverted yield curve. The Fed reacted by cutting rates three times and injecting money into the repo market. 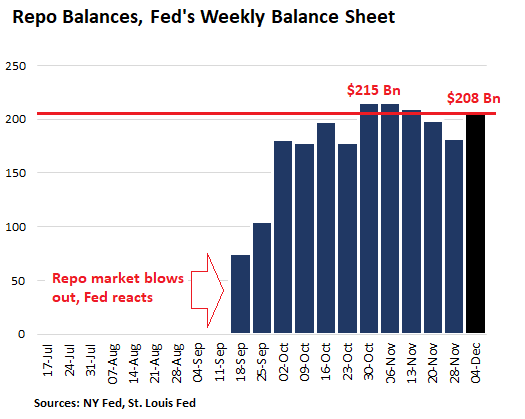 This Fed fire hose of cash has fueled one of the best stock market performances since 1997. This action trumps all other action in the market. When the Fed stops pumping money, the market will sell off. Until then, enjoy the ride.

According to Argus, a shipping news site, prices are already moving:

All major bunkering ports in the Americas were offering 0.5pc sulphur fuel oil by November, with the exception of ports in Peru and Ecuador, where suppliers were still waiting to hear from domestic refiners about supply dates.

Increased demand for 0.5pc sulphur fuel oil and fluctuating availabilities has caused the price spreads between 0.5pc sulphur fuel oil and one of the chief alternatives, MGO, to narrow at some ports in the Americas. For most of 2019, 0.5pc resid prices have been volatile due to varying degrees of availability and the terms of the trades. This is expected to remain the case at least for the early part of 2020 as the market continues to adjust to the sulphur regulation.

In terms of countries, the big winners will be Canada, Brazil, and Argentina because they have refineries and crude inputs that can produce low-sulfur oil. The losers will be Mexico and Venezuela, who produce heavy oil with high sulfur.