The Hyperloop is on its way...

A few weeks ago I went to visit my sister in NYC. I took a bus from Baltimore to Port Authority in the heart of NYC. The trip took about four hours.

I don’t care for buses. They’re cramped and hot, but it was my best and cheapest option to get there. Flying and the train were too expensive. Driving was another option, but with tolls and traffic, it probably would have taken longer (and been more expensive) than the bus.

I hate the U.S. transit systems.

Apparently, Elon Musk does too.

I know, Musk has so many lofty goals that it’s hard to keep track of them.

Colonizing Mars. Implanting computers in your brain. Sure, Teslas are nice to dream about, but I don’t know that I’ll ever get my hands on one.

I might, however, get to use one of his other ideas... I hate long commutes. I hate sitting in traffic. That’s why I think Musk’s Hyperloop is his most exciting idea.

The Hyperloop is an underground tube train… one that would travel at more than 700 mph. To put that into perspective, an average commercial jet flies at about 575 mph...

In a recent tweet, Musk claims that he got approval for a Hyperloop from N.Y-D.C (including Philadelphia, and Baltimore) that will make the journey in under thirty minutes.

A train ride from D.C. to NYC would take about three hours. A bus ride from Baltimore will take about four. A car would take five. Either way, you can expect it to take 3-5 hours to get between  NYC to D.C… And now Musk is promising to do that five-hour trip… In less than thirty minutes.

My current thirty-mile commute takes me about an hour.

On the Hyperloop… That would take about two minutes. 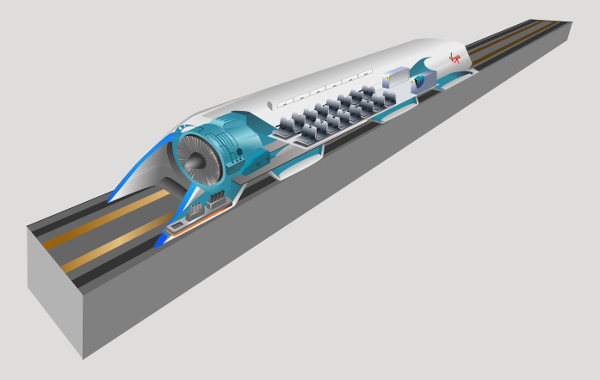 A twenty-nine-minute commute that links some of the biggest cities on the East Coast would be life-changing for millions of people.

You could walk past the Lincoln Memorial at nine… and be getting a bagel in NYC by nine-thirty.

Last year the Hyperloop One successfully tested on a 500-meter track and completed a system test in a vacuum environment just a couple weeks ago.

Interest in the Hyperloop also ramped up after news broke that instead of commercializing the Hyperloop as originally promised, it looks Musk wants to build the system himself. This news came as a shock to the companies developing their own Hyperloop systems, but who knows, maybe some competition will make the Hyperloop become our reality faster than it otherwise would.

Of course, Musk is known for his dramatic proclamations that come to little, but I’m hoping that the Hyperloop won’t be one of them.