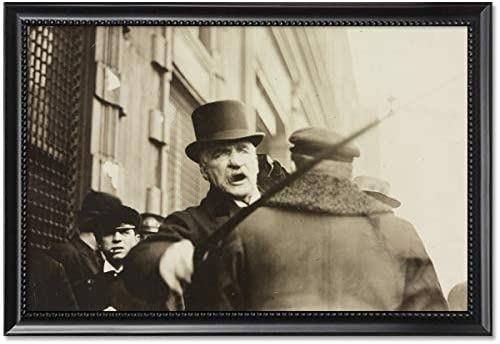 J.P. Morgan about to bash a photographer with his cane

Legend has it that in the Panic of 1907, with the world crashing about him, J.P. Morgan strode into NYSE, stood on a table, and with an hour to go until close, bellowed, “Buy!” thus saving his bank, all banks, Wall Street, and the U.S. harvest. This event, in turn, led to the creation of the Federal Reserve in 1913.

This pithy anecdote is only relevant in a tangential way, as I was having a Slack (NYSE: WORK) conversation with the esteemed Brit Ryle, senior editor of Wealth Daily.

Saying that I couldn’t wait for the next earnings season, I asked when Alcoa (NYSE: AA) reports. At which point he informed me that AA no longer leads the earnings season and that JPMorgan Chase & Co. (NYSE: JPM) reports first now. And they do on April 14, with Alcoa following the next day.

But what he really meant was that Alcoa got dropped from the Dow 30 stocks back in 2013 after being a component for 54 years and, therefore, can no longer lead the blue chips.

First-quarter earnings season is two weeks away. It won’t be good. Even companies that are doing well, like Teladoc (NYSE: TDOC) and Microsoft (NASDAQ: MSFT), thanks to the working from home (WFH) trend will be killed if gross domestic product (GDP) crashes — and it will.

Don’t get me wrong, these WFH companies have been going gangbusters. MSFT saw its Teams unit, which competes with Zoom (NASDAQ: ZM) and Slack, add 12 million new subscribers in one week. Its cloud usage climbed 775%. Slack had 12 million total subscribers a month ago.

But if you lose 15 or 20 million people from the workforce and companies stop buying new products, even the best companies will take a hit. When you lose your health insurance, you won’t use video doctors.

A Fortnight to Q1 Reporting

Goldman Sachs is projecting that GDP will be -24% in the second quarter and unemployment will be at 15%. Morgan Stanley is projecting a 30% drop in GDP.

And if that wasn’t bad enough, in a Bloomberg interview on Sunday, Federal Reserve Bank of St. Louis President James Bullard predicted the unemployment rate may hit 30% in the second quarter because of shutdowns to combat the coronavirus, with an unprecedented 50% drop in GDP.

These numbers are horrific. They are worse than 2008 and worse than the Great Depression. Companies, in their earnings reporting, will reflect this in their outlook, which, of course, will crush stocks.

Last week, I put out a note to my paid subscribers of Christian DeHaemer’s Bull and Bust Report. I want to share part of it with you because it is essential that you protect your assets. And the next two weeks will likely be your last chance to sell. You should take advantage of it.

You see, stock markets don’t just crash, it is a process like walking down stairs.  Right now we are in what is termed a "bull trap." Here is part of my note:

That is called a "bull trap" or a "sucker rally." It tends to last two and a half months and claw back 50% of the down move.

This is where the smart money sells while at the same time showing up on TV and telling you what bargains stocks are and how you can get Boeing (NYSE: BA) at $100 or Disney (NYSE: DIS) at $95.

Don’t listen to them.

Yes, stocks are cheap, but they will get cheaper. Look at the stocks that you own that will be hard hit. Divide the price in five and sell portions on the rally days. You want to be generous in your sells and picky in your buys.

Disney will take a long time coming back as its ESPN division has no sports. Its biggest revenue streams, its parks, are closed. That money can’t be made back up. This will be offset somewhat by its streaming.

What you want right now on your buy list is everything: value, growth, cashflow, balance sheet, supply chains, dividends, and demand. And if you are patient, you can get it.

As I've said before, the bottom isn’t in until there are “We Buy Gold” places in every strip mall, and Warren Buffett is in front of cameras talking up his great buy on some huge, well-known companies — and pundits are calling him a fool.

Bear markets end in despair, not in greed like we’ve seen over the past few days.

That said, there are some companies you want to own now, like oil storage stocks. I own a lot of them personally.

The very smart and knowledgeable Keith Kohl has been writing about and playing these in his trading service. Oil is selling for $14 a barrel today, but in March 2021, futures are selling for $34.49, which means oil storage companies can charge a great deal. Check this out.

If you play it right, these are the days you can make a fortune.