Markets around the world extended their losses this morning as trade tensions between the United States and China flare up.

Just two weeks ago, the Federal Reserve warned that trade disputes and geopolitical uncertainty could result in a “particularly large” drop in the stock market.

In the Fed's first-ever Financial Stability Report, the agency said:

An escalation in trade tensions, geopolitical uncertainty, or other adverse shocks could lead to a decline in investor appetite for risks in general. The resulting drop in asset prices might be particularly large, given that valuations appear elevated relative to historical levels.

Additionally, the report mentions economic slowdown in China. It says years of rapid credit expansion have put lenders more at risk to a slowdown. The Fed notes that private credit has doubled in China since 2008 and now stands at more than 200% of the nation's GDP.

Another focus for the Federal Reserve is still Brexit and fiscal trouble among the greater euro area. The Fed notes that large European economies have significant financial ties to the U.S. and that a spilled over from European fiscal challenges may pose risks to the American financial system.

It also points out that confidence in European fiscal and financial prospects as a whole remains sensitive due to other developments such as Italy's most recent budget proposal, which would widen the country's deficit and put the nation on an unsustainable path.

All in all, the Fed says these developments in domestic and international markets “pose near-term risks to the U.S. financial system.”

What should you do to protect yourself?

Well, there's a bit of a debate over that right now that's questioning the nature of safe-haven assets.

It started with the debate over whether Bitcoin and cryptocurrency are or are not chaos hedges. But it has now expanded into a debate over what it even means to be a safe-haven asset.

The traditional go-to has always been gold. But even gold's safe-haven status is now being questioned. Here are just a few comments of Twitter users with many followers from the debate: 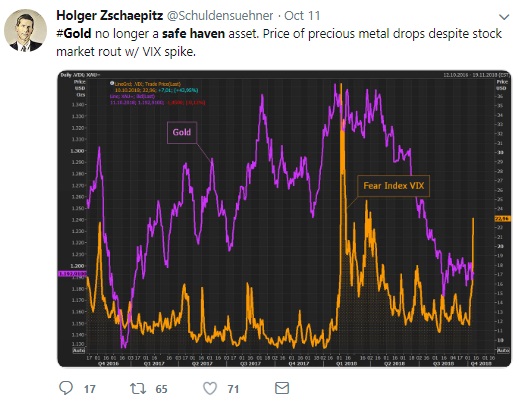 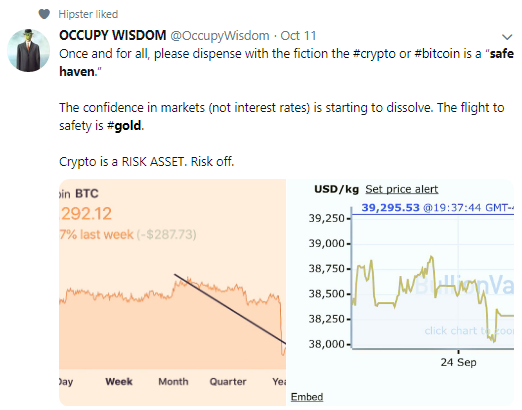 Join Wealth Daily today for FREE. We''ll keep you on top of all the hottest investment ideas before they hit Wall Street. Become a member today, and get our latest free report: "The Next Gold Rush: Three Easy Gold Investments fo 2020"

It contains full details on something incredibly important that''s unfolding and affecting how gold is classified as an investment..

After getting your report, you'll begin receiving the Wealth Daily e-Letter, delivered to your inbox daily. 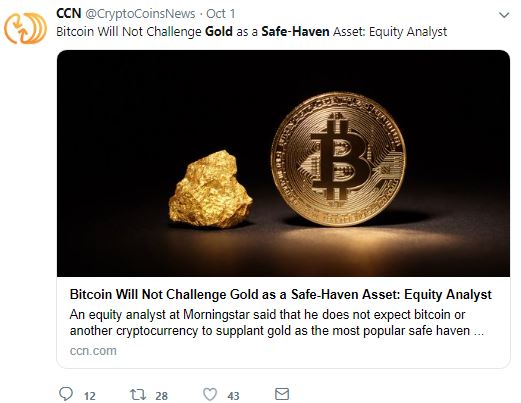 Despite all this, gold will likely remain the world's go-to safe-haven asset. Gold has been a monetary asset for more than 5,000 years. Bitcoin and a bunch of promotional tweets can really barely rattle that position.

So if you're looking to protect yourself from near-term financial instability, gold is going to be your best friend right now.

And of course, it matters what type of gold you own. Gold producers, developers, and explorers are great for leveraging higher gold prices. But they have one major drawback as safe-haven assets against U.S. financial instability: They're all still exposed to the same broad instability as everyone else.

Physical gold, on the other hand, is independent. There's no doubt that, like everything else, the price of gold is somewhat manipulated. But physical gold is not tied to any specific national fiscal system. If they all went down, gold would still survive as a monetary asset... the most important one at that.

There's a reason central banks still own physical gold. And it's not because they think it's pretty.

You should hold at least some physical gold as a safety net right now.

What if I told you that every time a box goes out, Amazon is obligated to pay you?

Using these simple steps, you could be collecting up to $48,000 in the next year alone.

Until now, only the world’s elite knew how to capitalize on this.

Briton Ryle is ready to let you in on a secret to get you your fair share. You can start collecting thousands of dollars worth of Prime Profits in the mail every month.