I don't know if I have ever shared this with my readers, but one of my pastimes is baking my own bread. In fact I often have a batch rising in the kitchen while I write my articles.

My mother was a huge influence on why I decided to take up this ancient art, which so few first-worlders practice anymore. To save a few bucks while trying to feed a family on a limited budget, my mother baked bread once a week for much of my childhood.

Those five loaves would last our family of five through the week-and we ate a lot of bread-for the low price of a 5-lb sack of flour, which was about $0.39 on sale in those days. Including the cost of firing up the oven, she calculated that it cost her about $1.29 to make a batch.

I had tried, semi-successfully and not so successfully, to replicate her bread a few times in the past, but I quickly learned that making bread truly is an art, and if you want to do it well, it takes a lot of practice.

So at Christmas a year ago, I had her walk me through it once again. And I went home and started to practice. By the time I had achieved a decent result, I was hooked.

It now costs me about $5 for the flour, thanks to inflation, but when you consider that buying the same loaves would cost me about $18 today, it's still a cheap way to enjoy good bread.

That's part of why I started making my own. I was tired of paying high retail prices for just so-so bread.

But the bigger reason was self-sufficiency. As part of my self-assigned preparations for a post-peak oil world, I wanted to be able to produce a decent loaf of bread starting with only the basics: flour, salt, yeast, and water. No electricity, no bread machines, no special ovens required. Just elbow grease and a little skill. (Our own metals investing guru, Greg McCoach, has actually taken it one step further, grinding his own flour from wheat to make his bread. I haven't tackled that one yet, but I will.)

Learning to rely on oneself was indeed one of the key themes of the Hemmingway novel alluded to in the title of this piece. And it's becoming an increasingly insistent theme in many aspects of our lives. King Arthur Flour, which is the brand that I and most home breadmakers use, has reported a lively increase in sales and interest as the price of wheat has soared.

The inflation of food prices is not only making headlines, particularly for prepared and packaged foods, but is also causing a growing unrest. Bread is, after all, the most basic of staples, and the poor--which is to say, much of the world--depend on it for a huge percentage of their daily sustenance.

A quick Google News search turned up these headlines in the first page of results, all from today:

The Bread is Rising... And May Explode [India]

Part of the problem is that the Australian wheat harvest was meager, due to their ongoing drought. This increased demand for American wheat, and helped to push up its price.

In fact, global stockpiles of grain are now at their lowest levels ever. The world now has a mere 40 days of grain supply.

But there are other factors which have conspired to raise food prices across the board, including escalating energy costs, the falling dollar, and the increasing allocation of good grain-growing land to biofuel production. It has been estimated that on average, it takes 10 calories of energy input to bring one calorie of food to your table, and as we saw in part 2 of this series, the cost of that energy has been skyrocketing.

According to recent U.S. Labor Department statistics, food prices have gone up dramatically in the last year:

But the price of wheat is the most stunning of all. Prices have more than doubled over the last year, and tripled since the end of 2005: 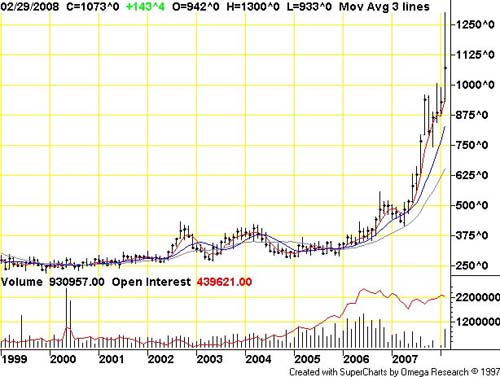 As if that weren't eye-popping enough, the volatility has been amazing too, with about a 20% variation in futures prices over the course of a single week: 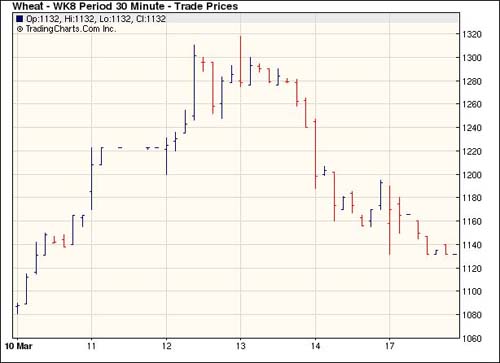 Such a fundamental inflationary threat to the productive base of the economy may finally put an end to the federal economists' little game of focusing on "core" price indexes, which exclude food and energy costs in order to come up with more optimistic numbers. So-called core wholesale prices jumped half a percent in February, more than double the forecast. To a hard-pressed worker just trying to get by, "excluding food and energy" is little more than a silly intellectual exercise.

Not only are food and energy closely interrelated, but weather is right in the mix too. The increasing use of fossil fuels contributes to global warming, which reduces food production, as was the case with the Australian wheat harvest. At the same time, weather impacts our ability to produce energy...and back around the wheel we go.

So let's take a look at the weather angle.

A report released a few weeks ago by the National Oceanic and Atmospheric Administration said that the average temperature this winter was the lowest since 2001 for both the U.S. and the world. But higher than normal temps for the South and the Northeast helped to keep the overall energy demand about 1.7% under the average.

Some climate change deniers have used the moderating temperatures as grist for their mills, but the details tell a different story: Record snow at Alta, near Salt Lake City, and a snowpack measuring 150 of average across the West, yet about a third of the West still suffers from moderate to severe drought. Record precipitation in the Northeast and record snows in some parts of New England, but two-thirds of the Southeast continues to suffer extreme drought conditions, and the northern portion of the area, including central North Carolina, northern Georgia, and northern Alabama, continues to flirt with drought disaster (you may recall Nick Hodge's piece on Georgia's water crisis from February). From Florida to North Carolina, they're still parched.

All of this has affected energy. The severe cold weather in Asia and Europe has made them willing to pay more than double the price of the U.S. benchmark for LNG, which is expected to cut into the LNG imports that were anticipated by the U.S. In Canada, freezing January temperatures shut down the oil sands operations of Syncrude, the world's largest producer of synthetic crude, shaving 17% from its expected first quarter production. Colder temperatures have also contributed to the rising price of natural gas shipped to Europe.

Inflation is the Cruelest Tax

On the whole, events over the last year have really reinforced the theses that we at Angel Publishing have been putting forth. Our free newsletters, Wealth Daily, Energy and Capital, and Green Chip Stocks have all correctly predicted the important trends that are playing out today:

Yet, there's little satisfaction in being right about what's wrong. Beyond being futurists and chroniclers of the unfolding crisis, we are also continually reminded that we have a responsibility to help find the profitable paths forward.

And those paths are inextricably interwoven. Everything affects everything else, and with every passing year, the world becomes more global in everything we do.

China's coal soot winds up polluting the West Coast, but their soot is largely driven by America's demand for their goods. America's thirst for oil has inextricably enmeshed her in the Middle East, but the terrorist backlash has changed us forever and continues to threaten our civil liberties and our geopolitical goodwill.

It also threatens our economic health. The five-year-old war in Iraq has now cost us $600 billion by the Pentagon's own conservative estimate, and will cost $3 trillion by Nobel-winning economist Joseph Stiglitz's more comprehensive estimate. Consider this: $3 trillion is enough to buy all of the U.S.'s oil consumption (21 million barrels per day) at a retail price of $100/bbl for four years.

But that's actually double-counting, because the DoD is the world's largest single consumer of oil, by far. Without the war, we'd be burning a lot less oil. So in reality, the cost of the war might cover all of the U.S.'s oil consumption for the last five years or more.

And yet it has not only failed to buy us energy security, it has actually made the situation worse, by driving up the cost of everything, draining our economic lifeblood, and ultimately funding those who oppose us.

As the adage goes, inflation is the cruelest tax, because it hurts the poor and middle-classes the most. What's worse, between inflation and the direct war costs, they're paying for this misbegotten adventure twice. In turn, the increasing costs of living will make it more difficult for them to service their debts, particularly their mortgages, which will further undermine the economy.

And our amazing growth in recent decades has come with a very high cost to our health and that of the whole environment.

We are truly all in this together, and more of us realize it every day. Peak oil, global warming, foreign policy, fiscal issues, water, food...all just different sides of the same human dilemma. We will have to make some difficult tradeoffs and tough decisions in the years ahead. I pity da fool who winds up serving the next term in the White House.

All the while, though, I'm going to be right here, on the pages of Energy and Capital and The $20 Trillion Report, to bring you the straight dope, and show you how to survive and thrive in these troubling times.

At the very least, it's going to be one helluva ride.