As I have been predicting for months, the IMO 2020 rules have disrupted the global fuel market. These new rules went into effect on January 1, 2020 and have mandated the reduction of sulfur used in marine fuel.

This has created chaos in fuel pricing.

High-sulfur fuel oil prices have collapsed, as HSFO (3.5% sulfur, or bunker fuel) is now illegal unless the ship is equipped with scrubbers. HSFO prices will stay weak. This will benefit shipping companies that went through the costly process of adding scrubbers.

Very low-sulfur fuel oil (bunker with 0.5% sulfur) has increased in price and is now on par with gasoil (MGO 0.1% sulfur). VLSFO is the new standard for ships.

According to S&P Global:

Translating the VLSFO-HSFO spread into shipping terms, a ship burning 20 metric tonnes of fuel per day will effectively double its daily fuel costs from $7,400 per day to $14,200 per day when switching from HSFO to VLSFO.

Suppliers are pushing up prices for LSFO as demand increases. In many locations, supplies remain tight. This in turn means shipping companies will have to pass on prices to consumers.

Freight rates are going up, and the global markets have yet to price it in.

Genco Is a Winner

While some 75% to 80% of the shipping industry will have to pay up for LSFO, companies like GNK can buy the cheaper HSFO.

This is because Genco has installed scrubbers on all of its ships before the IMO 2020 rule came into effect. The company also has a 6.59% dividend yield. 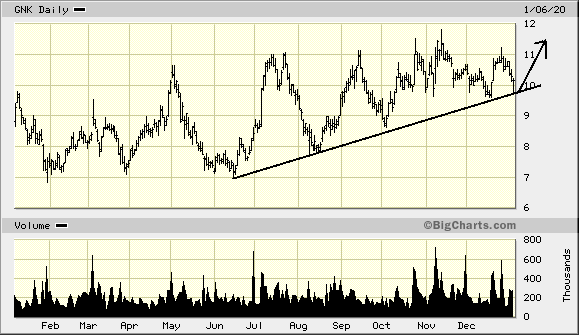 Coming off a brutal five-year recession in the shipping industry where share prices dropped 90%, many shipping company stocks have doubled over the last year and are still just climbing off the bottom. This trend has room to run.

But GNK isn't my favorite play in the sector. Click here for the best way to play it.

Three Trends to Own Now
Energy and Capital editor Christian DeHaemer makes his predictions on the markets using time-tested models, historical research, and a broad knowledge and practical experience of how markets work. Here are three trends you want to own for 2020.
The Coming 2020 Oil Shock
Energy and Capital editor Keith Kohl explains why a small group of investors is about to take advantage of a major shock about to hit the oil markets in 2020.
Hydrogen Fuel Cells: The Downfall of Tesla?
Lithium has been the front-runner in the battery technology market for years, but that is all coming to an end. Elon Musk is against them, but Jeff Bezos is investing heavily in them. Hydrogen Fuel Cells will turn the battery market upside down and we've discovered the tiny company that is going to make it happen.