Marijuana Millionaires: How to Profit from the Legal Marijuana Trade

Only a Moron Would Ignore These Marijuana Stocks

I was 15 years old when I tried marijuana for the first time.

I scored it from this girl in my home economics class. She got me high as a joke while we were preparing some turkey tetrazzini. The smell of the burning meat hid the scent of the pot.

A few days later, this same girl told me she could get me weed anytime I wanted it. And there began my first relationship with a dealer.

For nearly two years, she would sell me nickel and dime bags from the back of her rusty 1971 Buick Skylark. Sadly, after she graduated, we lost touch. Last I heard, she was working as a chef in some high-end restaurant in Manhattan.

It's funny, though, thinking about how we did things back then.

Buying pot was always done on the sly. You never talked about it in public, you could never really request certain strains, and because there was no Internet back then, it wasn't something you could discuss on anonymous chat rooms or social networking platforms.

Not so these days.

These days, you can go online and find out where marijuana is legal, how much you can legally purchase, and even uncover special deals that certain dispensaries are running.

You can also tap into social networking platforms where marijuana users discuss their favorite brands, their favorite ways to consume it, and even watch video reviews produced by “the experts.” 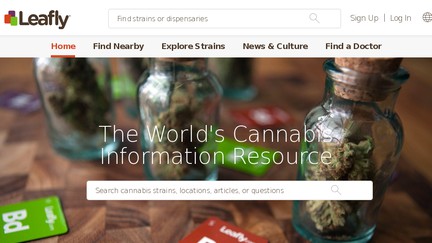 Leafly is a social networking platform that can help you explore various strains, find the closest dispensaries, and alert you to special deals.

Here's one that was just listed...

Leafly is actually the largest marijuana-related website in the world. It boasts more than 6 million monthly visitors and 31 million page views.

Oh, and the parent company that owns Leafly just recently closed on a $75 million round of funding — some of which came from billionaire Peter Thiel. You know, the guy that co-founded PayPal.

Today, Leafly is said to be valued at about $400 million. That's a lot of scratch for a marijuana website. But it's nothing compared to what's up for grabs when you look at the entire legal marijuana industry in the U.S.

According to market research group GreenWave Advisors, the legal cannabis industry in the U.S. could be generating $35 billion in revenue by 2020.

Now, while I don't really have much use for marijuana anymore, I do have a use for large sums of cash. And that's exactly what I've been making by investing in the legal marijuana trade.

The bottom line is that regardless of what you think about legal marijuana, this is, without a doubt, one of the greatest investment opportunities of the decade.