Pennsylvania-based oil and gas exploration and production company Eclipse Resources Corporation launched its initial public offering on Monday, floating 30.3 million shares of common stock. The common stock will be listed under (NYSE: ECR) and carry an anticipated initial price between $27 and $30.

Let's take a look and see what this new upstream player has under the hood.

Formed just three years ago by former Rex Energy Corp. (NASDAQ: REXX) executives, Eclipse was brought together to focus on shale oil and gas reserves in the Appalachian Basin, including the Marcellus, Utica, and Upper Devonian shale formations.

The company launched in 2011 as a partnership with EnCap investments, which held a $230 million equity stake in the project. To coincide with the company's launch, CEO Benjamin Hulbert announced it had just acquired an additional 20,000 acres in southeast Ohio and that the company had already begun drilling its first horizontal well there.

This brought the company's total holdings to more than 225,000 acres, entirely in eastern Ohio within the Utica and Marcellus shale. It owns land spanning Noble, Guernsey, Monroe, Belmont, and Harrison Counties, and approximately 40% of its holdings are located in what the company thinks is “the most prolific and economic area of the Utica Shale Fairway.” 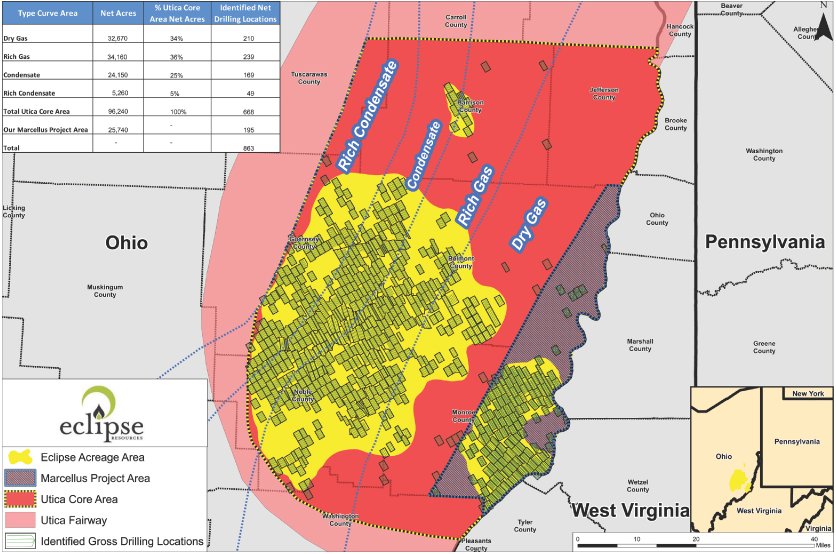 To get just a bit more specific, the company broke down its land holdings in its S-1 filing with the SEC today. It said it has identified 863 net horizontal drilling locations, with 668 in Utica and 195 in the Marcellus. 72 in the Utica and three in the Marcellus had commenced drilling.

As of March 31, the company was operating three horizontal rigs and one top-hole rig. Its first horizontal well in the Utica had an initial peak production rate of 23.2 Mmcf per day of natural gas, which amounts to 3,867 BoE per day.

The company expects to increase to six operated wells and participate in 103 non-operated wells by the end of 2014. Its partners will be Antero Resources, Gulfport Energy (NASDAQ: GPOR), Chesapeake Energy (NYSE: CHK), and Magnum Hunter (NYSE: MHR).

Though the Utica and Marcellus shale might not be as large as the Bakken or Eagle Ford shale reserves in North Dakota and Texas, some oil companies favor the Ohio and Pennsylvania formations because of their convenient locations. When transporting the recovered oil and gas is easier, the overall acquisition process becomes cheaper.

Magnum Hunter CEO Gary Evans recently shared with CNBC his belief that convenient location makes these shale deposits extremely promising. “There’s not a better growth story in the United States for gas than the Marcellus and Utica,” Evans said.

This is a big part of Eclipse's value, but it's currently unrealized. The company's acreage is close to a number of different pipeline systems, including the Texas Eastern, Rockies Express, Dominion Transmission, Dominion East Ohio, and Tennessee Gas, but it has not yet established any transportation agreements with the major midstream companies.

If it significantly increases its production, there will be transportation difficulties.

As of March 31, Eclipse had $588.8 million cash on hand. The company believes this will be “sufficient to fund our capital expenditures and other obligations necessary to execute our business plan over the two year period following the completion of this offering.”

The company's business strategy moving forward will be to develop its drilling inventory, economize production efforts in its wells, secure those precious midstream partnerships, and continue growing its acreage.

Eclipse closed out 2013 with a net loss of $43 million. Its revenues for sales of natural gas, liquids, and oil were 20.6 million, its operating expenses were $23 million, and its income tax and interest expenses brought it down into the red with a $40.1 million loss.

Unfortunately, since the company is so young, it has a decent chunk of debt to its name. It closed out 2013 with $389 million in debt against its net loss of $43 million. Its net assets were $1.14 billion, and its cash on hand was $109 million at the end of the year, so this somewhat offsets the loss, but the fact remains this is an oil company whose future is based mostly upon the possible output of a single shale formation. These first two years are going to determine whether Eclipse will thrive or not.

One of the main things going for Eclipse is the fact that its drilling is concentrated in Ohio.

You may recall a temporary halt to hydraulic fracturing activities in Ohio last March, when Hilcorp Energy had to cease drilling operations because of a spate of 2.6- to 3.9-scale earthquakes. This activity took place in the far east of Ohio as well, less than a hundred miles north of Eclipse's prime territory.

Youngstown, Ohio, the city closest to the action, has proposed an amendment to its city charter that would ban hydraulic fracturing to prevent any further earthquakes. This amendment, however, has been shut down three times by powerful interests who believe in fracking as an economic stimulant.

That pro-fracking sentiment is profound in Ohio. Governor John Kasich had a plan to “sell” fracking in state parks. Though the governor publicly opposed the idea in August 2012, new documents obtained by the Columbus Dispatch recently showed Kasich was actually a major proponent of the idea.

At the end of May, Ohio became the first state to ever roll its renewable energy standards backward.

In 2008, Ohio laid down a goal to have 12.5% of its utilities generated by renewable sources by 2025. The bill Kasich signed in May froze that requirement at the current level of 2.5% for two years and extends the final deadline to 2027.

A recent New York Times editorial blasted this bill for being part of the Koch brothers' war on renewables. In a major way, the success of Eclipse Resources is contingent upon the success of the fossil fuel lobby in the state of Ohio.