Making a New Play on Cannabis

So it’s finally going to happen...

Tesla is now prepared to open a new manufacturing facility in China.

The new factory will take a couple of years to build, and when completed, it will pump out a half-million cars per year.

Make no mistake: This is a very big deal.

With this agreement in place, Tesla will be the first foreign automaker to open a wholly owned manufacturing facility in China without a joint-venture agreement. This means it won’t have to pay massive import tariffs — a huge benefit considering China is already the company’s second-largest market.

Of course, this big announcement hasn’t placated the longtime Tesla bears who continue to trash the company at every corner. Incidentally, the ones who still short the stock continue to lose their shirts.

It’s funny, but I remember when I first recommended Tesla, right after it went public. I was called everything from a moron to a sucker. That’s when the stock was trading around $30 a share.

Then, in November 2016, I recommended buying shares of Tesla again. At the time, the stock was trading around $196 a share.

Of course, when I suggested buying the stock in 2016, it wasn’t based on just a random hunch.

A few years ago, I developed a fairly sophisticated trading algorithm called the S-50 Trigger.

Only instead of chess moves, the S-50 Trigger analyzes social, economic, and political patterns that will directly affect a select group of stocks.

It alerts you to a very specific type of event that will cause these stocks to soar before it happens.

In the case of Tesla back in November 2016, we found evidence to suggest that the new Trump administration’s pro-American manufacturing sentiment, coupled with the fact that Tesla was likely to announce that it had more than enough cash on hand — despite dozens of analysts suggesting otherwise — would result in an underlying strengthening of Tesla’s access to high-level politicians (in this case, the new president) and plenty of cash.

It was actually a bit of a no-brainer.

So while the masses were dumping Tesla, we were buying, and ultimately ended up making a boatload of cash.

Aphria, Inc. is a Canadian cannabis producer that had been very successful in raising large amounts of cash.

The S-50 Trigger actually compiles this kind of data to determine the strength of each company’s cash position. This, by the way, is only one of the dozens of data points it constantly analyzes.

Because of Aphria’s strong cash position, it was the company that was most likely to get the biggest boost from the legalization legislation that was still being worked out back in 2017.

The S-50 Trigger also compiles and analyzes legislation proceedings to determine when and if certain legislation will pass.

Around late May 2017, the S-50 Trigger alerted us to the potential time frame in which Ontario's government would be proposing its retail and distribution model of legalized recreational cannabis.

When the S-50 Trigger alerted us to this time frame, Aphria had been trading for around $5.40 a share.

And on September 8th, right inside the window that the S-50 Trigger alerted us to, Ontario's government proposed its new retail and distribution model for legalized recreational cannabis.

Here’s how that worked out: 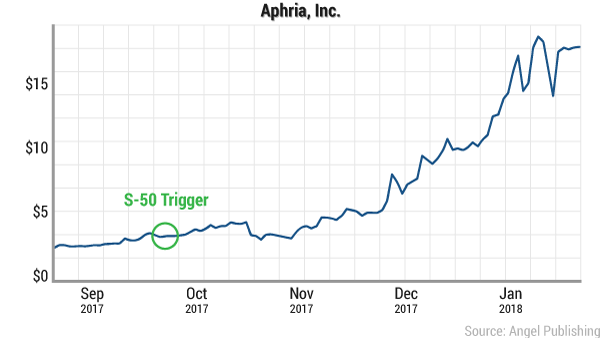 About six months after the S-50 Trigger alerted us to Aphria, its stock gained 256.8%.

A New Alert Has Been Triggered

The S-50 Trigger has just released a new alert.

This one is also regarding a cannabis stock. Well, five stocks, actually.

You see, on November 6, something very big is going to happen. So big, in fact, that it’s going to unleash more than $1.7 billion in new wealth. And there are five cannabis stocks that the S-50 has identified as the most likely winners of this windfall.

I’ve listed those five stocks in my most recent analysis of the S-50’s findings. You can get access to that list here.

Using the S-50 Trigger, this is how my current open portfolio looks: 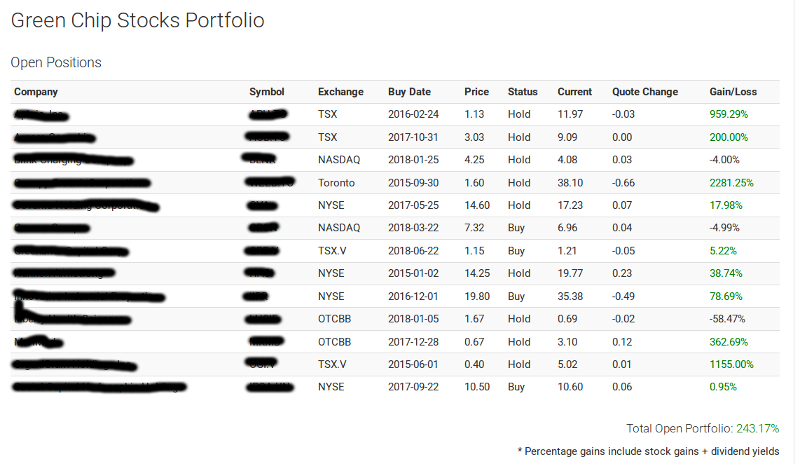 Not to be brash, but unless you hate money, you need to get access to the S-50 Trigger today. So click here to get started.

From Tesla to CRISPR: How Investors Profit from Progress
Embracing progress is the secret to building wealth. Energy and Capital editor Jeff Siegel decries the naysayers and talks about why sticking to his guns with everything from electric cars to CRISPR technology has been the key to his massive profits...
Pot Stock Investors Encouraged by Cannabis Legalization Developments in Mexico
If the new president of Mexico pushes to legalize cannabis, investors could make a fortune.
Hydrogen Fuel Cells: The Downfall of Tesla?
Lithium has been the front-runner in the battery technology market for years, but that is all coming to an end. Elon Musk is against them, but Jeff Bezos is investing heavily in them. Hydrogen Fuel Cells will turn the battery market upside down and we've discovered the tiny company that is going to make it happen.