Is it Time to Buy Luckin Coffee?

Its IPO came out of the gate strong, but by the end of the day, it began selling off in a major way. 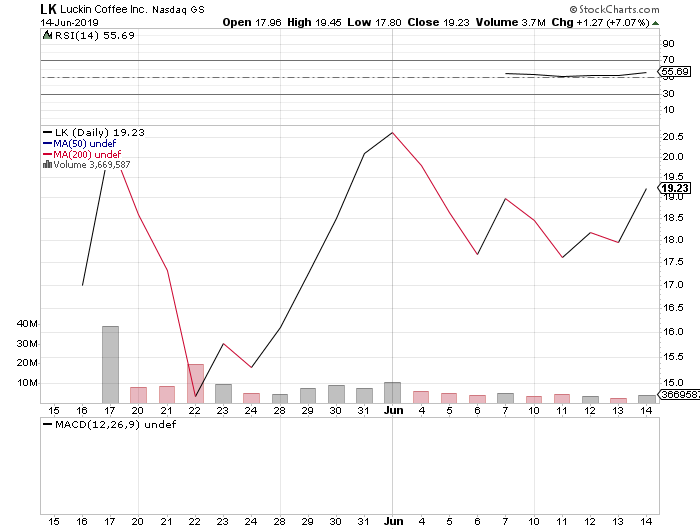 Not so great for first-day buyers, but an excellent opportunity for bargain hunters, as you can see in the chart above.

Certainly at $13.71, the stock was a bargain. It’s actually still a bargain today.

Dubbed the “Starbucks of China,” Luckin is the second largest coffee shop chain in China, and its pace of growth far exceeds that of Starbucks.

The company also has some pretty high-profile investors that have gone in - big.

As reported by Barrons, two sovereign-wealth funds and an American financial giant recently said they are large shareholders.

Carob Investments, a unit of Singapore’s sovereign-wealth fund GIC Private Ltd., paid a total of $45 million in 2018 for preferred Luckin stock. After the initial public offering, those preferred shares were converted into 44,256,000 class B Luckin shares, a 13.04% stake in the company, according to a form GIC Private filed with the Securities and Exchange Commission this month. GIC Private itself owns 250,000 Luckin ADSs, in addition to Luckin shares owned by Carob. Overall, it has a 13.63% stake in Luckin.

The Qatar Investment Authority disclosed on Friday that it owned 3.25 million Luckin ADSs, an 8.81% stake. The authority isn’t listed in Luckin’s preliminary prospectus as a pre-IPO investor. Qatar Investment didn’t immediately respond to a request for comment.

Overall, Wall Street is starting to take a liking to LK, with price targets ranging from $22 to $32 a share. On the high end, you’re looking at a potential gain of 66.4%.

I personally think LK is undervalued, with most estimates underestimating how rapidly Luckin can grow, and how much market share it can capture in such a short amount of time. Although I don’t believe comparing Luckin to Starbucks is a completely accurate assessment, as Luckin is more of a “pick-up coffee” spot while Starbucks is your conventional chain coffee shop.

That being said, Luckin is moving aggressively to become the number one seller of coffee in China. Whether or not that happens is still up in the air. But either way, at number 2, in one of the fastest-growing coffee markets in the world - boasting a population in excess of 1 billion - Luckin should not be ignored or trivialized.

The stock is currently trading below $20 a share. By the end of the year, Luckin should not be trading for any less than $27 a share.