Looking for the Next GameStop?

There are many narratives amid the GameStop (NYSE: GME) drama.

Among them are narratives concerning the role of short sellers in the market. One narrative portrays short sellers as cold scavengers, always betting on companies to fail, and costing good old-fashioned hardworking Americans their jobs.

Another narrative paints short sellers as a vital market function, separating the financially weak from the financially strong, and ultimately making the market stronger and more stable in the long run.

The most perverse narrative in the whole affair, however, is one of “us versus them” — a David and Goliath story where the underdog is the victor. And the underdog in that narrative is Main Street... the everyman retail investor... the 99%.

It's the same BS narrative that rallied the Occupy Wall Street movement and got Trump elected: The financial and political elite are actively oppressing you, so you have a duty (and a right) to stand up against them.

Of course, that's not necessarily the case. The only investors who really benefited were those who owned GME prior to the short squeeze.

And they just got lucky the Reddit community chose GameStop as its target for the short squeeze. R/WallStreetBets could have chosen any number of companies to target with a high short interest.

There was a story over the weekend about a 10-year-old boy who made “big bucks” from the GameStop squeeze. The New York Times reports... 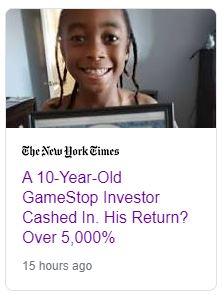 And if you were trying to champion some narrative that the GameStop short squeeze was a win for the common man, this is a story you'd point to as a success. But read past the headline and you'll learn that the boy's mother bought him the stock way back in December 2019. Buying the stock had nothing to do with the r/WallStreetBets plan to short squeeze the stock. The truth is this kid's success (not unlike most others, by the way) was just a fluke.

Boooo! Boooooooooo! Yeah, I know. You can't criticize any success in a child's life without facing criticism yourself, right? Well, that's the whole point in reporting the story in this way... You wouldn't be booing me if the person in The New York Times story were a 47-year-old father of three who worked for the IRS.

Truth is, this kid was just one of thousands of people who owned the stock prior to the short squeeze. It's great that he got lucky. But The New York Times is very clearly trying to appeal to the “us versus them” mentality with this one.

It's clear that narratives are partly driving the GameStop saga. In an interview with Yahoo last week, Jamie Catherwood, a client portfolio associate with O’Shaughnessy Asset Management, said:

Yeah, I think to me this is, like, all kind of just a microcosm of a market that is being driven more by narrative than fundamentals. And I think we've seen this play out in a variety of ways, whether it's the rise of ESG [or], I think, like, the Capitol riots.

But there is something more than narratives driving the mania... something less obvious.

Why did the r/WallStreetBets subreddit choose GameStop as the first target for its short squeeze?

Obviously, firms with high short interest have been the targets. And GameStop had a very high short position — as did other companies the subreddit focused on after GameStop. But r/WallStreetBets didn't simply go down the list of most heavily shorted stocks. Instead, it seemed to cherry-pick companies it liked from that list.

What I'm getting at is there seem to be other factors, more than a company's short position, that play a role in r/WallStreetBets targeting it.

Consider, for a moment, the specific companies that are being targeted for short squeezes after GameStop.

Those companies include AMC, BlackBerry, Nokia, and even Blockbuster. Even Dogecoin, a cryptocurrency intended as a joke, and now silver have also been swept up in the action.

When I look at the companies being targeted by r/WallStreetBets, I see a common thread.

At least a few other people have noticed this thread as well. They've mostly described it as “nostalgia.”

Nostalgia, and its defense, may also play a very big role in the financial activism. Feeling targeted by predatory short sellers like Melvin Capital, Reddit users are trying to make them literally pay. And as of Wednesday, Reddit investment rallies have been formed to prop up AMC Theaters and the ghost of video rental stores Blockbuster.

Yet while I do think nostalgia does play a partial role in which stocks are targeted for short squeezes, I still think there's more to it.

That's because not all targets are things people could be nostalgic about. No one is nostalgic over Dogecoin. And it's unlikely Redditors are nostalgic over silver. So I think there's more to it.

Another firm with a very large short interest is Virgin Galactic (NYSE: SPCE). Shares of SPCE have run up on speculation of a short squeeze. But a squeeze hasn't happened.

There are similar stories with FuboTV (NYSE: FUBO) and Ligand Pharmaceuticals (NASDAQ: LGND). Both have among the largest short interests on the market and mere speculation of short squeezes have moved prices somewhat higher.

So why does the r/WallStreetBets choose to target AMC over Ligand Pharmaceuticals?

Why favor Blockbuster over FuboTV?

Well, like I said, I think it simply boils down to some businesses or assets being preferred over others.

The most common Reddit users are ages 25–29. One in four Reddit users fall into this age range. That is the prime age range for interest in video games, movie theater attendance, and the target audience for assets like Dogecoin.

What I'm getting at is I think it would have been highly unlikely the r/WallStreetBets subreddit would have chosen a deeply unpopular company to squeeze despite the company's high short interest.

If Comcast had an extremely high short interest, would Redditors want to pump up its stock? Which do they hate more? Comcast or short sellers?

Or what if one of the major banks like Wells Fargo or BOA had a high short interest? Would Redditors go out of their way to pump up its stock?

I don't think they would.