For the first time in 29 weeks, the total rig count in the U.S. increased.

Although the increase was minimal — only two additional rigs were added compared to the week before — the news is a sign of hope for an industry beleaguered by falling prices, rigs counts, and profits.

The charts above show new-well oil and gas production for the Eagle Ford formation. The black line signifies rig counts, and as you can see, it has been in steep decline since the bear market.

This is indicative of the overall trend for U.S. oil and gas formations. If you were to look at the charts for other formations, you'd see a similar pattern.

Indeed, over the last year, fossil fuel producers have watched rig counts decline by 1,014 units, but last week's news shows us that producers feel less timid when it comes to risking the cost of new rigs.

Also of note in the Baker Hughes data was that 1,030 permits were issued for new wells — the highest number since the first week of February. In the previous 18 weeks, permits averaged below 900.

But it's important not to see these numbers and think oil is making a recovery.

Despite the jump in rig counts, oil rigs declined by three...

This means natural gas rigs increased by five and propped up the bullish numbers for all U.S. rigs last week.

Although natural gas in the U.S. has been beaten down for some time, things are looking up for the industry (and its investors).

Take a look at this chart... 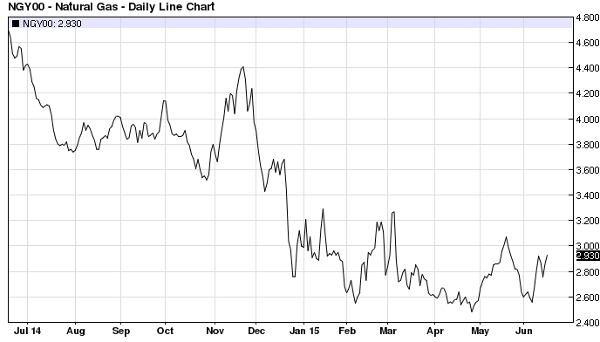 The fuel sits at typical summertime lows, but as the U.S. develops new electricity generating infrastructure, we'll see demand rise gradually over the next few years.

And the end of this year will mark the beginning of a new wave of natural gas demand that'll boost the gains for investors who are keyed in now.

Cheniere Energy (NYSE: LNG) will begin exports from four liquefaction trains at its Sabine Pass facility in Louisiana. It'll be the first project of its kind to enter into the export phase.

There are four major projects under construction in addition to Cheniere's Sabine Pass terminal. However, this number could soon increase, as two key developments happened in the last two weeks.

On the 19th, Kinder Morgan (NYSE: KMI) formally applied for approval of its Gulf LNG Liquefaction Project outside of Pascagoula, Mississippi.

The project, estimated to cost about $8 billion, will be an expansion of the company's existing LNG import terminal.

The benefit for Kinder Morgan is that this project would utilize the company's existing network of natural gas pipelines and allow for more control in separate phases of the development.

If approved (the Federal Energy Regulatory Commission has until June 2016 to decide), the terminal would begin operations by the end of 2020.

The company has two additional liquefaction trains being built at the facility that will boost its capacity by 50%.

The four trains set to go online at the end of 2015 are approved to ship 2.2 billion cubic feet per day, while this new expansion adds another 1.38 billion bcf per day.

The company still needs to make a final investment decision on the project, but with this approval on the books, it's just a matter of time before construction begins.

Once these and the other projects under construction or in review by the Federal Energy Regulatory Commission make headway, it'll be a short time before natural gas demand in the U.S. skyrockets to unheard-of levels.

That's why it's critical for investors to build positions now while prices are low.

All Hands on Deck for Natural Gas

Once the current LNG projects under construction start liquefying and exporting natural gas abroad, they'll soak up about 9 billion cubic feet of gas each and every day.

Right now, that number would be one-eighth of all U.S. gas production.

Sure, some of these projects won't be finished for a few years, and natural gas production will increase in the meantime, but it would be foolish to think it'll increase enough to make 9 billion cubic feet per day a negligible amount.

One-eighth of U.S. gas production gone would set up a huge spike in both demand and prices for natural gas in the U.S.

Add to this the industrial uses and the new natural gas power plant additions (which are many), and it's inevitable that gas prices will rise.

When they do, so too will the value of companies that drill, harvest, ship, and produce the fuel for consumption.