The forklift is the Rodney Dangerfield of drivable machines. It gets no respect.

The humble forklift is grotesque when compared to the elegance of any consumer vehicle. And it's nowhere near as cool as big tractor-trailers or the giant haul trucks used in mining. I mean, it's just a stupid forklift, right? 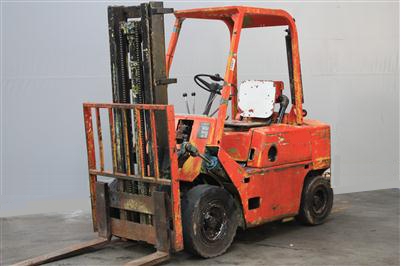 Most people just see the forklift as a dirty warehouse machine. But this tusked workhorse is actually a very important cog in the greater economic machine.

As you read this right now, there are countless forklifts all over the world moving every sort of consumer and industrial good imaginable. Everything around you has been moved by multiple forklifts at several stages throughout its creation and distribution.

Forklifts massively increase productivity and are so important that sales are actually a great lagging indicator of the economic strength. Compare U.S. sales of forklifts gathered from the North American Industrial Truck Association (and yeah, there really is a market association focused specifically on forklifts) to U.S. GDP growth rate.

But along with broad economic trends, we also can look to forklift sales to confirm the strength of other markets. Specifically, I'm talking about the rechargeable battery market.

Since 1994, U.S. sales of forklifts with internal combustion engines have only increased slightly. However, American sales of electric rider forklifts and motorized hand lifts, which use rechargeable batteries, have almost doubled.

But while companies make the shift to lithium-ion battery forklifts, there's still another competing technology on the horizon: hydrogen fuel cells.

Both lead-acid and lithium-ion batteries take time to recharge. And relative to your cell phone, the recharge times are pretty fast. On average, an electric forklift needs about 20 minutes to recharge every four to eight hours.

But even a 20-minute recharge means a lot of down time every six hours. Over an entire year working three shifts, that would equate to 486 hours of time charging.

Hydrogen fuel cells, on the other hand, can be refueled in as little three minutes. And that means much less downtime for forklifts with the technology and increased productivity for the companies using them overall.

There are currently only about 250 hydrogen refueling stations spread around 23 countries. As a result of this (and high costs), less than 7,000 hydrogen fuel cell cars have been sold globally to date.

But in a centralized environment such as a warehouse with a dedicated refueling station, using hydrogen fuel cells to power forklifts makes a lot more sense. Forklifts generally don't travel too far from their homes, if at all. And that means a refueling station is always nearby.

High costs are still keeping down sales of hydrogen fuel cell forklifts. But the technology will become more affordable in the future and will continue to refine the humble forklift.

The faster-growing trend for forklifts now is still lithium-ion. But angel investors might want to consider a position in the hydrogen fuel cell forklift niche.