Lifting the U.S. Embargo Against Cuba Will Create Wealth and Prosperity for Both Countries

Last week, hundreds of Cubans took to the streets to protest.

The images were emotional and grand.

Middle-age mothers marching with their clenched fists in the air...

Defiant grandfathers cheerfully waving Cuban flags with the words “anti-communist” written on them...

Noncompliant teenagers being shoved into the backs of police cars — many of whom may never be seen again... 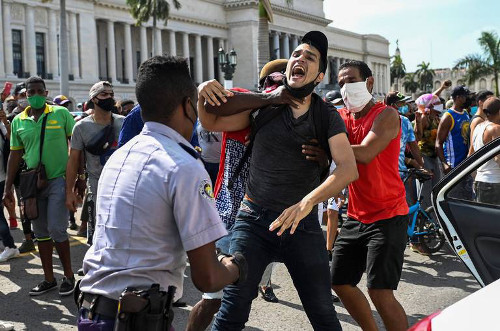 This is the reality of protesting in a communist country, where such things are met with a kind of government thuggery most of us can never even imagine.

Now, I’ve been studying Cuba for a while.

My interest in Cuba began in 2014, after former President Barack Obama met with Raúl Castro in 2014 in an effort to begin the process of normalizing relations between the two countries.

This was intriguing to me because it represented the first glimpse of a potential end to the U.S. embargo against Cuba — an embargo that has now lasted 63 years.

Originally designed to bring Cuba to its knees and break its communist rule, it was and continues to be a massive failure. Communist rule has actually thrived in Cuba since the embargo was initiated in 1958.

Sadly, though, many politicians continue to support the embargo as a way to scare voters into believing that if the embargo were lifted, we’d be rewarding a murderous communist regime.

Of course, this is complete nonsense.

Congressman Ron Paul opined on this many years ago, saying…

We talked to the Soviets. We talk to the Chinese. And we opened up trade, and we're not killing each other now. We fought with the Vietnamese for a long time. We finally gave up, started talking to them, and now we trade with them. I don't know why the Cuban people should be so intimidating. I think we're living in the dark ages when we can't even talk to the Cuban people. I think it's not 1962 anymore. And we don't have to use force and intimidation and overthrow of governments.

Ending the U.S. embargo against Cuba should actually be something fairly easy for both sides of the aisle to agree upon. Economically, politically, and socially, this really is a no-brainer.

Of course, that doesn’t mean it’ll happen. But if it does, make no mistake: We will be very eager to capitalize on such an opportunity that will not only benefit early investors but the good people of Cuba too.