I am getting old. Perhaps I drank too much on vacation — those umbrella drinks at the tiki bar were brutal in hindsight. An honest Scotch is a better, more pure libation. Scotch will tell you right up front what it is about. There is no pussyfooting around like you’ll find in pink drinks near the water.

There is something about toes in the sand and girls in bikinis that makes the mind go soft. Perhaps that is what is wrong with this country, the markets, and life in general. After 10 years of a robust bull market, we’ve all gone fat in the middle.

What’s the point of common sense and hard work if foolishness and slacking pay just as well? This is why politicians on both sides spend like a sailor on shore leave. They don’t even pay lip service to a balanced budget anymore. Debts don’t matter, they tell us.

And they don’t until they do... What did Hemingway say about going broke? It happens two ways: gradually, then suddenly.

The national debt hit $22 trillion recently. That seems like a lot of money. More than you can really imagine. Best not to think about it.

John Maynard Keynes came up with the idea of deficit spending. He said you should borrow and spend during a downturn and pay it back during a boom. That seems to make sense, but everyone forgets the second part.

We are in the tail end of a historical boom, and the knuckleheads at the Federal Reserve are cutting rates, while the scum in Washington are boosting spending.

These are the thoughts that seep around the fortifications of palm trees and crystal blue waters and ruin a good vacation.

The First Week in September

It is late August. In late August, it doesn't matter what happens in the markets. In two weeks, all of the overpaid brokers will be back from the Hamptons and worrying about their Christmas bonuses. They will jiggle their bellies with the back end of a pen, think abstractly about the gym, and then buy the stocks that have been going up.

Here is the 10-year Nasdaq ETF, the QQQ. 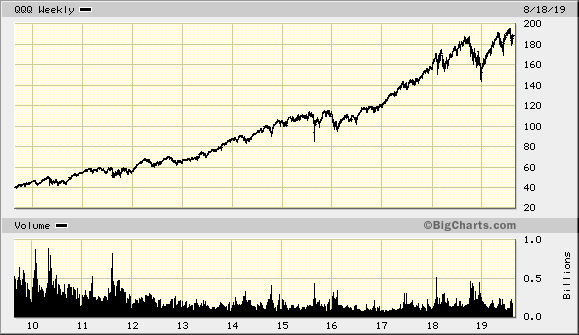 It remains bullish, with higher highs and higher lows. We are up 30% year to date, though the year started at the bottom of the trend. The Nasdaq is basically at the same spot it was a year ago.

My prediction is that the recent winners will be bought up the first week in September. If we make new highs, look for another leg up. If not, we’ll retest those December lows.

How to Get Rich Despite the Fed
The best way to make money is to have your money work for you rather than working for your money. Energy and Capital editor Christian DeHaemer gives you some tools to fight back against the uber-elites.
What 5G Means for the Cannabis Industry
In many ways, 5G innovations born out of the broader agricultural sector will overlap with cannabis. Energy and Capital editor Luke Burgess explores where it will have the greatest impact.
What the Crow Knows About Investing
To most people, crows are nuisance birds. But they're also highly intelligent. They can use tools, remember faces, and even invest more wisely than most people...
How to Get Rich While Making the World a Better Place
Energy and Capital editor Jeff Siegel reflects on how sometimes the world's most unfortunate events can be moneymaking opportunities... but how investors can also align their values to some hugely profitable investments.
Hydrogen Fuel Cells: The Downfall of Tesla?
Lithium has been the front-runner in the battery technology market for years, but that is all coming to an end. Elon Musk is against them, but Jeff Bezos is investing heavily in them. Hydrogen Fuel Cells will turn the battery market upside down and we've discovered the tiny company that is going to make it happen.