The renowned fund focuses on the long-term shorting of companies and markets that have been vetted by extensive amounts of research, and is the largest of its kind.

This morning, Chanos gave an interview with CNBC that has been making the rounds on financial news desks and twitter feeds. According to the short guru (more on this in a moment), American drillers are in serious trouble.

“The fracking and shale revolution was propelling us to be the largest oil producer in a way that I though was uneconomic and still uneconomic for the drillers.”

He says that the drillers with the most to lose aren't the little frackers in the Bakken and elsewhere, but are the major oil producers like Exxon (NYSE: XOM), Royal Dutch Shell (NYSE: RDS), and Petrobras (NYSE: PBR).

Chanos argues that because of the lack of cheap, conventional oil, the major drillers have been forced to find the resources that are difficult to get to, and thus take on a lot of debt and can't capitalize as directly on what they produce.

Now, I don't think this is a bad argument, however, I'm not sure that oil majors will be the first to struggle during this bear market and time of oversupply. 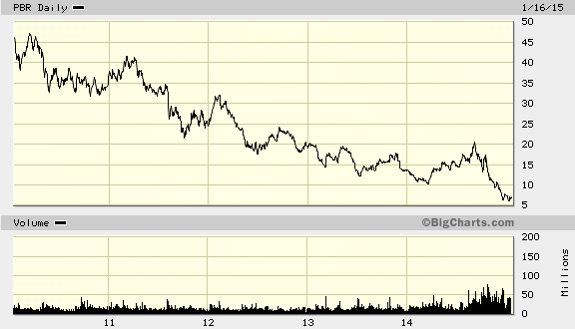 As you can see in the five year chart above, Petrobras was struggling when oversupply wasn't even a concern. And while this supports Chanos' argument, I'll say that he certainly isn't the first to see Petrobras struggle.

We've been watching the slow decline of Brazil's national petroleum company shares on the market for years. So I'm not sure a short on the stock is a bold claim, by any means. As it stands the company doesn't look like it can go much lower than it already has.

And as far as Exxon goes, the argument that the company has to find less conventional forms of oil isn't just true for Exxon, but for every driller everywhere (unless you're talking about Saudi Arabia or Iraq).

Since this is the case, the companies that are in the best position to withstand large stock market losses, faltering profits, or even strained oil production, are the companies like Exxon that have a diversified portfolio of assets and a long history of profitability.

Also, my colleague, Keith Kohl, recently wrote a piece about how Exxon is changing from a big oil company to a huge gas producer... according to Keith, Exxon has a total of 25.2 million barrels of oil equivalent in reserve. And of those reserves, only 29% is in crude oil whereas 49% - 71.8 trillion cubic feet – is in natural gas.

Although I can understand the concern from Chanos, I'm also skeptical that his shorting of the company doesn't reflect its natural gas assets nor the long term prospects of natural gas... which are quite good.

Plus, Chanos is known for shorting stocks, he shorted Enron back in 2001 and China in 2010, which turned out to be great bets. And that word is so vital to all of this... he makes his career on bold bets. I'm not necessarily saying he's wrong, I'm just saying that he's taking a huge risk, and going on CNBC, a massive platform, doesn't hurt his chances when investors see what he says and start to panic.

But, when I think about it, Exxon probably isn't going away anytime soon.

As far as investment goes, just take a look at this one year chart... 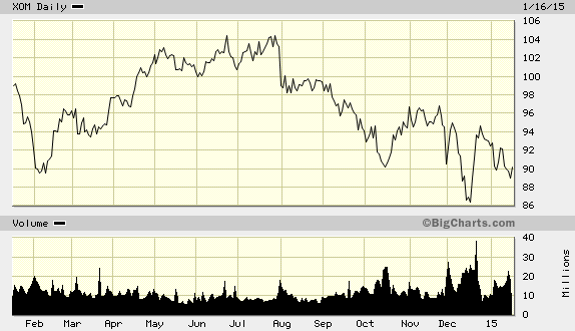 Exxon has only dropped about 12% since the decline of oil by more than 50% over the last six months or so, and is well ahead of other oil and gas stocks in terms of share price.

While I respect Mr. Chanos' opinion and investing prowess, I'm not convinced that Exxon is faltering too much.