It's Raining Gold in India: Report

It's raining gold in India.

At least that was the rumor that reportedly caused hundreds of people near Bangalore to go searching the ground for fallen gold.

According to a report by Asianet News, a rumor “spread like wildfire” that gold coins fell from the sky with a recent rainstorm near a police station in the town of Anekal. The report said locals believed these gold coins once belonged to the ancient rulers of the region.

A video posted by Asianet shows a few dozen people (not hundreds) digging in roadside dirt looking for gold coins and two examples of the supposed finds. Check them out here: 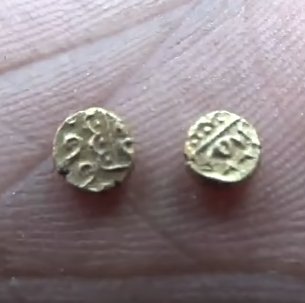 Clearly the whole thing is a hoax or a misunderstanding. Someone is having a laugh. Or someone got very lucky and found some old gold relics. There very well may have been gold coins lying buried in the area. And the recent rainfall may have washed away enough dirt to reveal them.

It's highly unlikely any gold fell from the sky. Depending on their size, gold coins falling from the clouds could actually be very damaging and costly. A 1-ounce gold coin falling from a few thousand feet would reach terminal velocity at around 70 miles per hour. That wouldn't be good for people's windshields. Those shown, however, are too small to do any damage.

Either way, what's interesting here is not the truth behind the gold's origin — heck, it doesn't even matter if the images of the supposed gold find are real. What's interesting is people's reaction to such a crazy rumor.

Someone tells you it's raining gold outside.

Do you look out the window?

I mean, there's no way you could possibility believe gold is falling from the sky for any likely reason. But do you look out that window anyway?

Maybe. Maybe not. But I think most people would, at least slightly, be compelled to take a peek. Clearly there are at least a few dozen people in the world who were compelled enough to go outside and start digging.

Of course, this isn't the craziest thing people have done upon hearing rumors of gold discoveries. Men have sailed oceans on rickety wooden ships. They've crossed continents with draft animals, they've climbed mountains of ice into the clouds, they've dug deep into the Earth... Millions of people throughout history have risked life and limb just to get their hands on a small piece of that yellow metal.

Yet today, gold is largely considered a monetary relic of the past by most academic economists. Digital currencies and payments mean we don't even need a physical medium for exchange. Still, even with all our fancy new monetary systems, we find humans so attracted to gold that a crazy story about it falling from the sky prompts a small rush. I think this shows us the attraction to gold is still very strong.

At this point in history, we really don't need gold for any monetary reason. At best, gold can keep monetary policy in check. But the right legislation can do that, too. Nevertheless, the appeal of gold remains in the public eye. And being that this has been a love affair active for millennia, it's unlikely gold will fall out of favor anytime soon.

I recommend taking a look at what my colleague Christian DeHaemer is saying about gold right now. Click here.