Is Wind Power Hitting its Stride in the U.S.?

Now is the time for a renewable boom

With the Clean Power Plan coming online, there's no better time than now for renewable energy sources to be booming.

Wind power especially has seen some recent growth in both technology and reach.

The wind turbines themselves are getting more efficient, mostly due to size increases. The “hub heights,” or the height of the turbine rotor above the ground, have risen to a current average 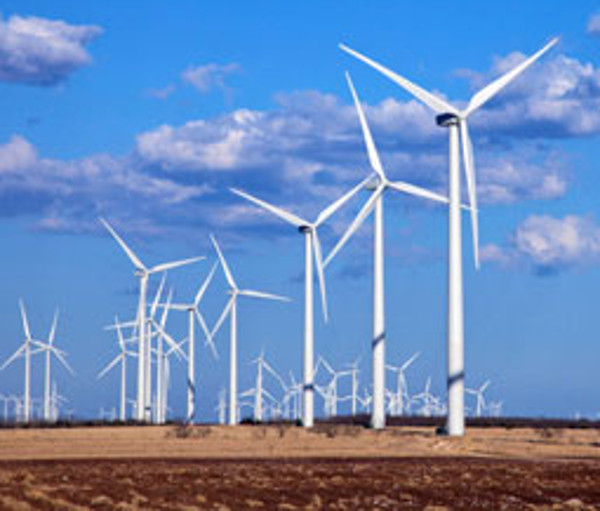 of 82.7 meters. Simply put: the higher the blades, the stronger the wind, and the more energy the turbine can produce.

Another advancement is the size of the blades themselves. The diameter of the turbine rotors has grown to average 99.4 meters as of 2014, more than double the average from 1998-1999. Larger rotors can produce “more power at lower wind speeds,” according to the Department of Energy.

Head of the DOE Office of Energy Efficiency and Renewable Energy Jose Zayas has suggested that the combined larger rotors on higher turbines will help wind energy's availability spread, with the current goal to reach a height of 140 meters to produce optimal amounts of electricity to be distributed all over the country.

The total installed capacity of wind energy in the U.S. is 66 gigawatts; this accounts for about 5% of the total electricity capacity. Zayas states that another 13 gigawatts are being constructed and will be online by next year.

This major growth in the wind energy sector means lower prices for the technology, and will eventually lead to a more widespread use of it. Already such major tech companies as Google, Yahoo, and Microsoft are commissioning wind farms to power their energy-hungry data centers.

In fact, the current commercial price of wind electricity has already reached 2.35 cents per kilowatt hour, “cheaper than the average price of wholesale electricity in many parts of the country,” according to Lawrence Berkeley National Laboratory researcher Ryan Wiser.

With the Clean Power Plan, the EPA expects this growth to continue as states decide how they want to reach the new emissions goals.

The current rate of innovation has already pushed wind over the DOE's original estimation of 20% U.S. energy from wind power by 2030. The U.S. is already one of the world's top wind energy producers, and is set to stay there.

Jidai: Wind Powers Gas Energy Production
Energy and Capital editor Chris DeHaemer explains how Japan is looking to reduce its carbon footprint to zero by 2040.
Is Obama's Clean Power Plan Too Optimistic?
Energy and Capital editor Keith Kohl takes a closer look at some of the goals of Obama's Clean Power Plan and how it aims to achieve them.
General Electric (NYSE: GE) Expanding Energy Storage Projects
Energy and Capital editor Keith Kohl looks into General Electric's plans to expand their position in the energy storage market.
78% of Germany's Energy Supplied by Renewables
Energy and Capital editor Keith Kohl explains how more than three-quarters of Germany's energy supply came from renewable sources last week.
Hydrogen Fuel Cells: The Downfall of Tesla?
Lithium has been the front-runner in the battery technology market for years, but that is all coming to an end. Elon Musk is against them, but Jeff Bezos is investing heavily in them. Hydrogen Fuel Cells will turn the battery market upside down and we've discovered the tiny company that is going to make it happen.