Is the Coin Shortage a Government Setup for a Cashless Society?

I hopped in an Uber last week and got to talking to the driver, as I so often do. We were talking about the coronavirus pandemic and how it has affected financial markets when he said, “Let me ask you this: Do you think the government is using the coronavirus to justify a coin shortage so they can push a cashless society onto us?”

I couldn't help myself — I laughed out loud.

“What?!” I asked, still chuckling and smiling widely behind my mask.

He repeated the question, “Do you think the government...”

Shaking my head, I really didn't know how to reply at first.

“No, I don't,” I started. “There are a million other things in short supply. PlayStations are in short supply. That's not a Sony conspiracy. Most likely it just boils down to disruptions in distribution — kinks in the supply chain.”

He seemed to be satisfied with that answer, nodding in agreement.

As I got out of the car, I wondered if this was a conspiracy theory he read somewhere on Facebook or other social media. And the first thing I did when I walked in the door was look up this theory.

Lo and behold, it's pretty much already on every anti-government and conspiracy theorist blog and all over social media. 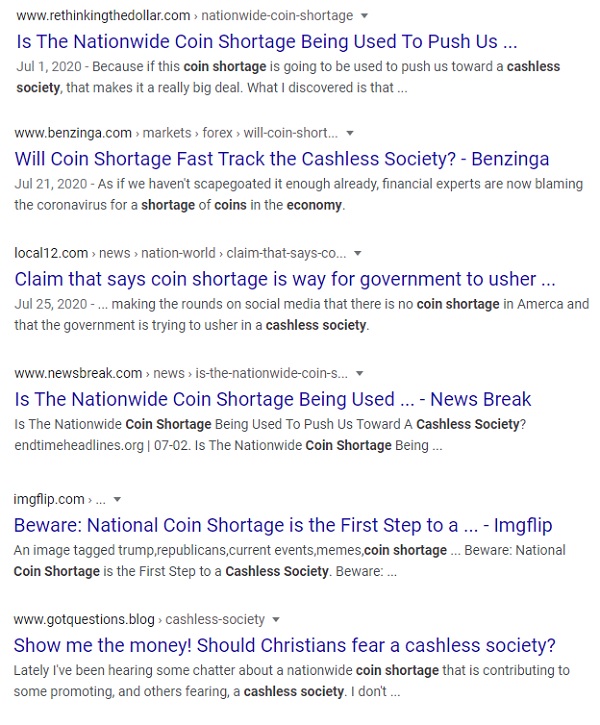 First, the nation is having a coin shortage — not a cash shortage. There are plenty of notes around. If the government were trying to push cashlessness onto society, why wouldn't it make a note shortage too? In fact, why wouldn't it do that first?

But then consider what this conspiracy would really involve: immediate and coordinated action from multiple different government, semi-government, and private agencies working covertly to fundementally change economic transactions between humans. I would guess several hundred individuals would need to be involved here. That's unlikely to happen even in an optimal environment.

The real question I think we need to ask is does the government really want a cashless society?

Certainly, the government does have an interest in making less cash. Cash costs money to produce. Nothing is free. Not even printing money.

Every year, the Federal Reserve reports the costs for printing notes of each denomination. Here's how much it costs the the Bureau of Engraving and Printing to produce each note in 2020:

Even though it only costs a few cents to produce each note, the U.S. Mint has to make billions of notes per year. During fiscal year 2019, the Bureau of Engraving and Printing delivered approximately 6.2 billion notes to the Federal Reserve. This year, the Bureau of Engraving and Printing will spend about $21.5 million just making $100 bills. So making less cash is a cost-cutting measure for the government.

But the government has other interests in a cashless society, particularly when it comes to taxes.

Cash is used to pay employees under the table, which, unless it's reported to the IRS, isn't subject to income tax. Without cash, employers would be forced to find another way to pay workers under the table or else hire them as legitimate employees.

Cash is also used to facilitate crime. There are no drug dealers who take Visa. The government, of course, has an interest in curbing crime any way it can, not only for obvious safety reasons but also as another cost-cutting measure. Crime costs money — a lot.

Point is, there are a lot of reasons the government has an interest in a cashless system or a society with less cash. And I think it's safe to say it encourages digital payments to some extent. But ultimately, I think what the government wants most is whatever facilitates the market best. And that's exactly what we have right now: a mix between digital and physical cash payment options.

Truth is, the government has never really pushed cashlessness onto America. Sure, the banks love it. It saves them even more money. But going completely cashless would also result in problems of its own — again, some dealing with taxes.

Federal law requires physical cash to be accepted for all debts, public and private. That's explicitly stated on every single U.S. note.

On top of all that, going cashless could blow up in the government's face.

There is a lot of physical U.S. currency around — about 1.5 trillion notes around the world. And most of it is held outside the United States. The Treasury and Board of Governors estimate that nearly 60% of all U.S. banknotes in circulation are offshore. That cash is going to be difficult — if not impossible — to recover. And that might lead to the dollar becoming a black market currency itself, perhaps even increasing its value higher relative to the digital dollar.

Going completely cashless is, like everything else, a double-edged sword. There are pros and cons. The best system seems to be what we have now: a mix between digital and physical cash payment options.

Fact is, every American consumer has the option now to use cash. But most don't. Credit and debit cards are simply more convenient — plus, you don't have to wait for that old lady to dig in her change purse for that dime she's sure is in there.

And now with coronavirus fears, cash is going out of style more quickly. Many stores around the country have posted signs reading “No cash please” for fear of spreading the virus.

That's part of what we've been calling "the new normal." I don't think the new normal will mean a cashless society. But I do think it will mean a society with less cash. And that means opportunity.

My colleague Chris DeHaemer recently published a new report on the five biggest megatrends of the new normal. A society using less cash is one of those megatrends. To check out the complete report on all five megatrends, click here.