The headline seemed damning, but the devil is in the details. 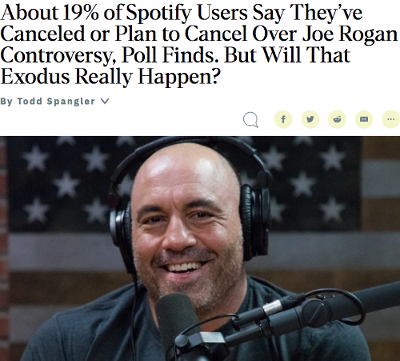 But if you look beyond the clickbait headline, you’ll find that this poll is about as reliable as Chinese drywall.

That’s not even big enough to be an accounting error.

The narrative it wants to push — that Spotify is in trouble for supporting Rogan — doesn’t pencil out.

This is also true for those who tried to equate a slide in Spotify’s stock price with the short-lived movement and Twitter trend to “cancel Spotify,” fully ignoring that the stock had been selling off for nearly a year and during that particular week, the broader markets were getting absolutely crushed.

That week, unless you were shorting the Dow or bullish on defense stocks, you likely lost money. And I can assure you, that had nothing to do with people canceling their Spotify subscriptions.

Now, I don’t know much about Spotify from an investment standpoint, but I don’t buy for one second that Joe Rogan will be the downfall of the company. In fact, Rogan is probably the company’s most valuable asset.

So it wasn’t surprising when Chris Pavlovski, the CEO of video-sharing platform Rumble, told Rogan via Twitter that he would pay him $100 million to leave Spotify and come to Rumble:

We stand with you, your guests, and your legion of fans in desire for real conversation… How about you bring all your shows to Rumble, both new and old, with no censorship, for 100 million bucks over four years? This is our chance to save the world. And yes, this is totally legit.

I don’t know how having Rogan on Rumble will save the world, but that hyperbole was enough to put some asses in the seats.

Never mind the fact that Rogan has continued to say he’s not leaving Spotify or that Spotify already has an ironclad contract with him anyway.

The chances of Rogan ever jumping ship to go to Rumble are slim at best.

That’s not to say Rumble won’t be a successful platform. It’s certainly been successful in attracting a right-leaning audience that feels ignored or trivialized by platforms such as Twitter and YouTube.

The question is, is that enough to make the stock a good investment?

Given that there’s not really much here in terms of historical performance, it’s hard to say.

The company has definitely been killing it in terms of growing its user base.

Last month, Rumble announced it had nearly 11 billion minutes watched and averaged 4,383 hours of uploaded video per day. That’s not trivial. The company also saw nearly 20% growth in monthly active users, taking it up to 39 million.

Of course, putting the asses in the seats is only half the battle. You also have to be able to monetize those asses. And therein lies the rub. It’s just too early to tell if Rumble will be successful in turning its right-leaning, anti-cancel culture ethos into tangible profits.

If the company can pull that off, it could be a legitimate contender to more conventional forms of right-leaning media. But until then, this will be little more than a meme stock at best.

In short, it might be great for trading, but I wouldn’t plan my retirement around it.