Oil prices jumped over 4% on Friday. And traders were ecstatic.

But the excitement was short-lived.

OPEC announced at a meeting in Vienna on Friday that it would cut crude production by 1.2 million barrels per day in an effort to lift prices. Reuters reported this was 0.2 million over the expected output cut.

The market responded. Crude for January delivery increased to over $54 per barrel... but gave up almost all of its gains just a few hours later. 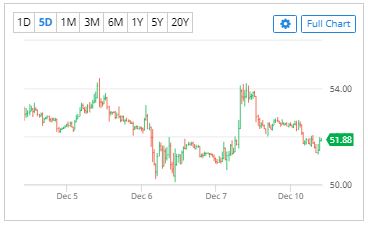 As we've talked about before, OPEC has had great success in manipulating oil prices with a series of ongoing back-and-forth announcements of production cuts and increases.

But this time, its little game didn't seem to work.

What happened? Is OPEC losing control of the market?

In the Financial Times Opinion section this weekend, an articled titled “Opec is not the power broker it once was” seems to answer that question directly.

Nick Butler, who has decades of inside experience at BP, subtitled the piece, “The old methods of controlling prices by restricting production no longer work,” and he gave a great argument.

He mostly talks about Qatar's decision to leave and how that is a leading indicator of, as Butler puts it, “a recognition that the market has changed.”

All in all, it does seem that OPEC's influence might be waning.

Just consider that in today's media, there are countless ridiculous news stories that can easily overshadow a boring OPEC meeting.

Which of these headlines do you think would get more clicks?

Of course, OPEC does still have a lot of power. About 40% of the world's oil production comes from OPEC members.

But it's easy to see how that power can slip away. Fact is, six of the world's largest 12 oil producers aren't part of OPEC.

Still, I think it's important to remember OPEC does have a heavy hand. And it probably isn't going to just give up.

If the old methods stop working, we can be certain to expect new methods on the horizon.

What those new methods might be can only exist in our imagination for now. But OPEC is sure to give it the old college try.

There is a good argument for OPEC losing some power. And the most important matter to us as investors is how this could potentially affect oil prices.

But that's very hard to say.

Fact is, we can't exactly measure OPEC's influence over the market. So whatever power OPEC loses (or gains) is very difficult to translate into market movements.

If I had to guess, however, I don't expect OPEC's loss of influence will have any significant near-term effect on the market.