Is it Time to Short Tesla?

Jim Chanos may finally be right.

After years of getting it completely wrong, it looks like the outspoken critic of one of the most disruptive companies on the planet could be ready to cash in by betting against Tesla (NASDAQ: TSLA).

I’m not exactly sure when Chanos started shorting Tesla, but it was far enough back to know that if you had taken his advice in the past, you would’ve lost a small fortune.

Even as recently as last June, Chanos was bashing Elon Musk and telling the world that Tesla was doomed after the company announced it would be acquiring SolarCity.

"SolarCity, whose bonds were yielding 20 percent yesterday, is a company headed toward financial distress. It is burning hundreds of millions in cash every quarter, a burden that now Tesla shareholders will have to bear, at a total cost of over $8 billion," said Chanos, who has previously disclosed bets against both firms.

"And if you don't want to believe me, consider this: The combined market drop in the value of both companies is more than the equity value of the deal itself — which means that Tesla shareholders think SolarCity shares are essentially worthless," Chanos said. "Finally, it is hard for me to believe that this deal was not being contemplated when Tesla, and Mr. (Elon) Musk himself, sold shares just a few weeks ago." 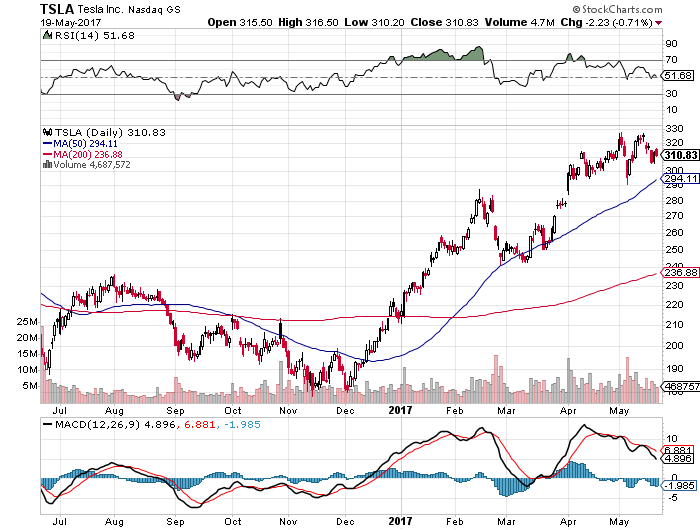 As tiresome as Chanos’s rants against Tesla have become, we may have finally hit a point where some of his analysis has become sound.

Last week, Chanos opined on Tesla again, telling Bloomberg that the company is not worth what it’s trading at today based on its current business.

And even Elon Musk has admitted it, saying that Tesla is a money-losing company and its market cap is higher than it deserves.

The truth is, Tesla has always been overvalued based on the technicals. But the run on Tesla was never about the technicals; it was about what it could be — not what it is.

To investors, this may seem counterintuitive. Why would you ever invest in a stock based on the illusion of success? Because after all, until success has been realized, it really is nothing more than an illusion.

But Tesla bulls initially invested in the company because of the success it would ultimately enjoy. And in all fairness, sometimes this strategy can work in your favor.

This is the Tesla story, too.

But as Chanos noted in that Bloomberg interview, Tesla must succeed at making a mass production car, which is the Model 3.

He is absolutely right.

The Model 3 is the ultimate game changer, not just for Tesla but for the entire auto industry.

If successful, Tesla will prove that an affordable electric car can be profitable. And because it doesn’t have the burden of producing internal combustion vehicles as well, Tesla can focus on the ultimate prize: the first profitable electric car company on the planet.

If Tesla can pull this off, the transition to electrified transportation will happen much quicker than anyone can possibly imagine.

Now, while I wouldn’t short Tesla — because quite frankly it seems like every time folks bet against Elon Musk, they lose — I would NOT recommend running out and buying shares of the stock right now, either. The risk vs. reward scenario is just not particularly favorable.

Make no mistake, I have little doubt that Tesla will be incredibly successful in selling the Model 3. (Full disclosure: I am on the waiting list to get one.)

But as an investor, there are just too many better opportunities right now to make a boatload of cash.

It’s All About Timing

As you know, I’ve been very bullish on the legal cannabis space over the past few years. And truth be told, I’ve made a hell of a lot more — and in a shorter amount of time — from legal cannabis stocks than I ever made on Tesla.

Less than three years in, my portfolio currently boasts five different legal cannabis stocks, all with gains in excess of 300%. And this is before full-scale legalization in Canada, which is expected to begin next year.

While I love Tesla and will continue to be a fan of the product, there’s nothing I find more profitable right now than the legal cannabis market. It truly is the best investment opportunity of 2017. But don’t take my word for it. Click this link and look at the numbers for yourself.

I’m telling you right now, just as I told folks back in 2010 to buy Tesla, this is your opportunity to get in on the ground floor of something that’s going to be insanely profitable. But you have to get in now if you want to get the most bang for your buck. Because just like Tesla, the folks who will truly get rich from this opportunity are the folks that get in now — not 10 years from now.

Fortune favors the bold, dear reader. Be bold, and get that money while the getting’s still good. Click here to get started.