Is Cobalt the best Investing Opportunity of 2018?

In the 1870s, Henry Morton Stanley, with the sponsorship of King Leopold II of Belgium, explored the heart of Africa in the Congo.

You may know Stanley from another achievement. On November 10, 1871, he tracked down David Livingstone in Ujiji, near Lake Tanganyika, and posed the famous question, “Doctor Livingstone, I presume?”

Stanley went on to map the last great geographical mystery of Africa, the Congo River. But he didn’t do it alone. He set off from Zanzibar with five dogs, 352 bearers, and three Europeans — all of which died.

However, the people who lived on the Congo wished he had stayed home.

King Leopold acquired rights to the Congo at the Conference of Berlin in 1885 and proceeded to make it his personal property.

Leopold enslaved millions of people and put them to work under savage conditions on rubber plantations. This was one of the most despicable acts of violence and destruction known to humanity. It is largely unrecognized, and yet it set the stage for centuries of ruin, murder, and war. If you are interested, King Leopold’s Ghost by Adam Hochschild is an excellent book on the subject.

The Belgian Congo achieved independence in 1960. But there would be no peace — a proxy war between the U.S. and the USSR meant that by 1961, the first Prime Minister had been executed.

Multiple coups and a couple of international wars later led to more mass slaughter and destruction.

The Democratic Republic of Congo has the unenviable distinction of having the highest casualties per capita of any country since the Second World War.

And the troubles won’t end.

Current President Joseph Kabila's last term ran out last December. And instead of following in the path of Cincinnatus and George Washington and going back to the plough, Kabila delayed elections under the pretense of waiting for a census.

This first step towards dictatorship sparked off a new round of violence and rebellion, which is going on to this day.

According to the UN, the number of people displaced by conflict in the Democratic Republic of Congo has nearly doubled in the past six months to 3.8 million.

A horrible war in a far-off place wouldn’t matter to the gods of Wall Street very much, but in this case it does.

You see, the DRC is the world's largest producer of cobalt in the world by a factor of nine. Without the Congo, you can’t get cobalt. And without cobalt, you can’t get electric cars. 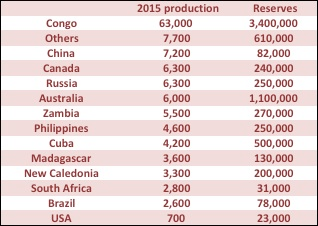 The battery industry uses 42% of all cobalt produced for the lithium-ion battery — a misnomer, as it should be called the cobalt battery, because cobalt makes up 58% of it by weight.

Here is the deal, though: Because of the current rebellion in the Congo, Freeport-McMoRan sold its largest producing mine to China Molybdenum last year. Other deals indicate that China is attempting to corner the upstream market in cobalt in order to supply its needs for electric vehicles.

This could put non-Chinese EV makers in a bind. China might be hurt as well — a general strike shut down production in the Congo for two days last week.

Meanwhile, back in the United States, Elon Musk claims he will sell 500,000 electric vehicles a year by next year. This all sets up a supply crunch, and the price of cobalt is climbing higher. 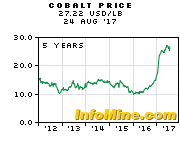 Cobalt could become expensive. In fact, this could be your best investment of the next two years.

My good friend Keith Kohl is all over it with in-depth research and unique, non-African-based cobalt suppliers that you want to own before Tesla ramps up production. Click here now.