The bullish sentiment on gold is rapidly growing amid both institutional and retail investors as the number of reported COVID-19 cases increases in the U.S., casting shadows on hopes of a fast economic recovery.

With reported coronavirus cases jumping in Southern states, the U.S. set a daily record for the number of new cases yesterday. According to data collected by Johns Hopkins, 40,401 new cases were recorded on June 25, surpassing the previous record set on April 24, which saw 36,291 new cases.

There is little doubt the increase in the number of new COVID-19 cases is a result of more testing. However, health experts say other measures indicate the virus is, in fact, making a comeback.

But, whether the number of rising cases is simply due to more testing –– or real proof of a resurgence –– matters only little for now.

See, governors around the country used reported numbers of COVID-19 cases and deaths to shut down their economies in the first place. They were not considering COVID cases and deaths in their state relative to how other states were testing. States that provided the most tests will have no doubt showed the highest numbers of reported cases and vice versa.

If governors choose to continue their reopening phases amid increasing numbers of reported COVID-19 cases, they open themselves up to criticism (and probably legal trouble) over putting people in danger as well as their original decision to shut down.

If they choose to pull back on reopening, they'll be criticized and probably get blamed for playing politics at the expense of business.

For now, it looks like governors around the country are choosing the latter.

Earlier this week, Texas Governor Greg Abbott put a hold on lifting restrictions and reimposed a ban on elective surgeries to save hospital space after the reported number of COVID-19 cases statewide more than doubled in two weeks.

Meanwhile, Arizona Governor Doug Ducey also said further efforts to reopen would be placed on hold as cases arise. Both governors are Republicans.

With fears of a slower than hoped for recovery spreading rapidly, more and more investors are running to gold. For the year, gold prices have increased by about 16% and are now flirting with $1,800 an ounce. 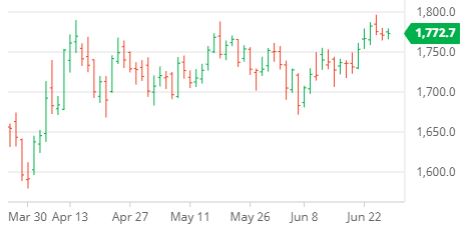 Bank of America strategists believe gold will break through at all-time highs within the next six months. Chief Global FICC Technical Strategist Paul Ciana wrote in a note to clients this week:

The breakout occurring now that is ending Q2 completes an eight week trading range that has resumed higher. The range breakout targets $1,900 while the head and shoulders continuation confirmed in April targets $1,947. These patterns say gold can make a new all-time high in the (second half of 2020) with Q3 on our mind.

Analysts at Goldman Sachs agree. They believe gold prices will reach $2,000 an ounce within 12 months on the back of low real interest rates and fears of currency debasement. In a note to clients last week, Goldman Sachs wrote:

Gold investment demand tends to grow into the early stage of the economic recovery, driven by continued debasement concerns and lower real rates. Simultaneously, we see a material comeback from [emerging market] consumer demand boosted by easing of lockdowns and a weaker dollar.

Some are expecting even bigger moves in gold. In an interview on Wednesday, Dan Oliver, founder of Myrmikan Capital, said gold prices could rise to as high as $10,000 an ounce with the Federal Reserve's balance sheet at serious risk of devaluation. Oliver told Kitco News:

The Fed, as you know, has been on a massive purchasing spree because of the virus situation, and so therefore the equilibrium price of gold is going up commensurately, and so the numbers now to balance that balance sheet are enormously high. My [forecast for gold prices] has changed. I’m at $10,000 now.

With a much slower than expected recovery and currency fallout from monetary and fiscal policies already in place, I think we can absolutely expect higher and higher forecasts for gold prices. We could soon hear forecasts of $50,000 an ounce, $100,000 an ounce, or higher. It happened in 2011, and it could easily happen again.

Such lofty predictions are probably unlikely to unfold. Nevertheless, they're good for short-term gold prices. So, we believe it's a good time to be overweight with gold despite recent price increases.