Investing in the Solar Panel Shortage

3 Stocks to Own for the Coming Solar Shortage

An impending glut of solar panels was going to be the death knell for the industry.

Or at least that's how the solar bears framed the argument just a few short years ago.

Today, however, it's a different story...

A shortage of solar panels is now going to kill the industry.

Or at least that's how the bears are framing the argument this time.

So don't hate, my friends. Participate!

According to Bloomberg New Energy Finance, the solar industry may install as much as 52 gigawatts this year and 61 gigawatts in 2015. That's up from 40 gigawatts in 2013 and more than seven times what developers demanded five years ago.

Bottom line: The smart money is doubling down on the solar manufacturers gearing up for the shortage.

Right now, Canadian Solar (NASDAQ: CSIQ) is building a new solar cell factory that, when completed, will be able to pump out 300 megawatts of annual capacity.

SunPower (NASDAQ: SPWR) has a new facility in the works, too. Production at this new factory is expected to begin in 2017 and will pump out 700 megawatts per year.

And of course, there's SolarCity (NASDAQ: SCTY). This financing and installation company announced in June that it would be acquiring solar panel manufacturer Silevo (as well as building a new manufacturing plant) in an effort to lock in a steady supply of product to meet demand.

We are in discussions with the state of New York to build the initial manufacturing plant, continuing a relationship developed by the Silevo team. At a targeted capacity greater than 1 GW within the next two years, it will be one of the single largest solar panel production plants in the world. This will be followed in subsequent years by one or more significantly larger plants at an order of magnitude greater annual production capacity.

Given that there is excess supplier capacity today, this may seem counter-intuitive to some who follow the solar industry. What we are trying to address is not the lay of the land today, where there are indeed too many suppliers, most of whom are producing relatively low photonic efficiency solar cells at uncompelling costs, but how we see the future developing. Without decisive action to lay the groundwork today, the massive volume of affordable, high efficiency panels needed for unsubsidized solar power to outcompete fossil fuel grid power simply will not be there when it is needed.

Even if the solar industry were only to generate 40 percent of the world’s electricity with photovoltaics by 2040, that would mean installing more than 400 GW of solar capacity per year for the next 25 years. We absolutely believe that solar power can and will become the world’s predominant source of energy within our lifetimes, but there are obviously a lot of panels that have to be manufactured and installed in order for that to happen. The plans we are announcing today, while substantial compared to current industry, are small in that context.

I remain extremely bullish on SolarCity, and I do hope you picked some up after I suggested you do so following the free fall that took the stock down to below $50 back in March. 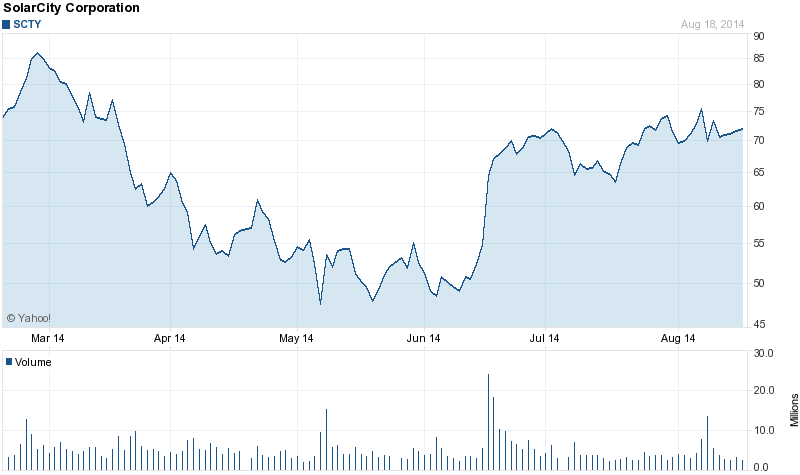 Today, SolarCity trades for around $70 a share. On the low end, I maintain that this is easily a $75 stock, while Goldman puts it higher at $85 and Deutsche Bank at $90.

Of course, if you prefer a little more action and the opportunity for an even bigger gain in the solar space, consider one of the up-and-coming solar tech plays that don't get much attention in the mainstream but that are poised for major gains as the solar market continues to soar.

You can read more about those here.

Full Disclosure: I currently own shares of SCTY.