Investing in the Solar Bull Market

When asked why he robbed banks, Slick Willie Sutton said, “Because that's where the money is.”

I've always loved that quote, not just because of the sarcastic nature of it, but also because it serves as a very basic guideline for investing.

Not that this is some great revelation. Obviously you don't want to pony up your hard-earned cash for shares of a company that's losing money and has no chance of ever becoming profitable.

Although, to take it one step further, if you only have a certain amount of money to invest, obviously you want to invest in the opportunity that's going to give you the most bang for your buck and that carries the least amount of risk.

This is one of the reasons I've always been so bullish on energy. If you're well diversified and you follow the trends and growth patterns, you can always make money. Whether it's in domestic oil and gas production, coal exports, or nuclear development in emerging economies, there's always a bull market somewhere.

But there's one sector in particular where the bull market is everywhere.

By 2030, $7.7 trillion will be invested in new power plants across the globe. These will include everything from coal to nuclear to natural gas.

But of that $7.7 trillion, $5.1 trillion is expected to be funneled into renewable energy.

According to Bloomberg's New Energy Finance, the global breakdown is as follows:

While renewable energy resources vary from place to place, solar seems to be the big winner in each region. As reported in New Energy Finance's latest investment forecast...

Solar power will top clean energy installations in every region over the next decade and a half. Capacity will expand the most in Asia, where new solar sites will exceed gas and coal combined.

“The period to 2030 is going to see spectacular growth in solar in this region, with nearly 800 gigawatts of rooftop and utility-scale PV added,” Milo Sjardin, BNEF’s head of Asia Pacific, said in the report. “This will be driven by economics, not subsidies, as our analysis suggests that solar will be fully competitive with other power sources by 2020.”

Although solar makes up merely a fraction of overall capacity throughout the world, it is also growing the fastest — particularly in the United States, where Q1 2014 installations of solar photovoltaics grew 79% over Q1 2013.

In Q1, 74% of new electric generating capacity in the U.S. came from solar, and for the first time ever, more than 30% of residential solar installations came on-line without any state incentive.

Another interesting tell is that in Q1, residential solar photovoltaic installations actually exceeded commercial installations. This is a pretty big deal, as it indicates a tipping point in pricing that's now allowing regular folks to slap some solar panels up on their roofs.

Is it any wonder I continue to remain so bullish on U.S. solar installation and financing companies?

The big dogs in this race right now are SolarCity (NASDAQ: SCTY), SunPower (NASDAQ: SPWR) and SunEdison (NYSE: SUNE). All three have proven to be quite profitable over the past couple of years. Take a look... 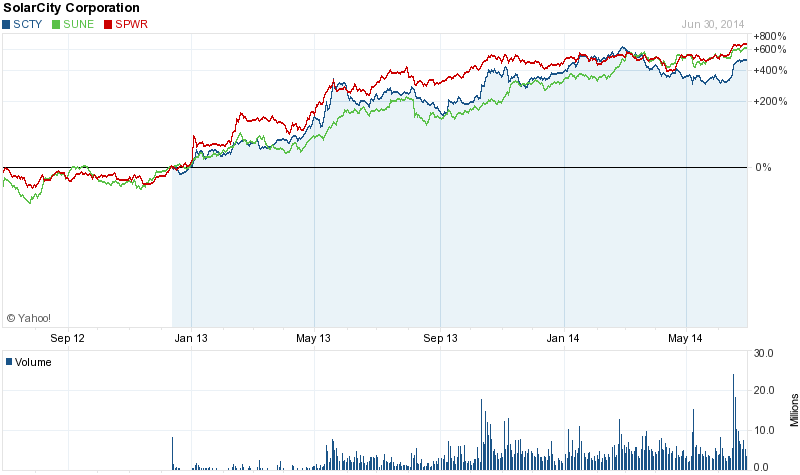 Why do I invest in renewable energy? Because that's where the money is!