Investing in the Sol-Wind IPO

As a part of his new budget proposal, the president is seeking a 7.2% increase in funding for “clean energy.” As well, he is asking for a permanent extension for the solar investment tax credit (ITC) and the wind energy production tax credit (PTC).

The solar ITC is set to expire at the end of 2016, and the wind energy PTC has already expired.

I can pretty much guarantee that a permanent extension of these tax credits is not going to happen. However, because so many red states generate an enormous amount of tax revenue and jobs from solar and wind, it is likely that both sectors will be thrown some sort of bone — particularly solar, as the industry now supports nearly 174,000 jobs

That data does not fall on deaf ears, despite the dog-and-pony show some lawmakers will put on during election season.

No, solar is the real deal. The market is booming, and cost reductions continue to make it more and more affordable for homeowners and businesses.

Which is why I hope you've been taking some of my advice over the past couple of months and taken a position in some of the more impressive solar names, like SunEdison (NYSE: SUNE), SunPower (NASDAQ: SPWR), and Canadian Solar (NASDAQ: CSIQ).

Canadian Solar absolutely crushed it yesterday after announcing its acquisition of Sharp Corporation's Recurrent Energy. Check it out... 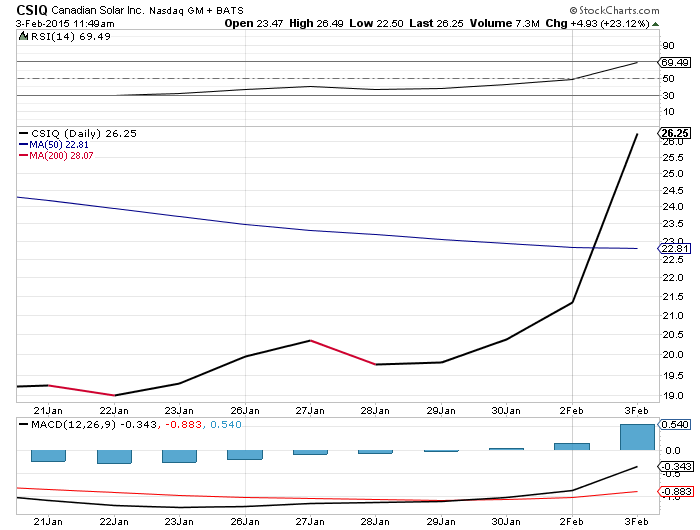 Recurrent has a massive utility-scale project pipeline that's scheduled to be built before the planned date of the solar ITC expiration. This is a huge win for Canadian Solar, representing an estimated $2.3 billion in revenue.

Going forward, I remain bullish on these major solar stocks, as well as the alternative energy yieldcos.

Back in November, I wrote in my yearly alternative energy predictions report that 2015 will be the year of the yieldco.

Yieldcos essentially allow retail investors to buy into multiple alternative energy assets that produce steady cash flow. For those who are not particularly keen on risk but still want exposure to the burgeoning alternative energy space, this is a great way to do it. Some of the bigger names include:

And next week, we'll be adding a new one to this list: Sol-Wind (NYSE: SLWD).

MLP for You and Me

As we wrote to our Green Chip readers earlier in the year, Sol-Wind will be the eighth yieldco to debut since 2013. However, this one is a bit different in that it seeks to utilize a master limited partnership (MLP) structure, so it'll actually be taxed differently from other yieldcos.

Now, because federal law does not currently permit MLPs for renewable energy companies (although oil and gas companies are permitted), Sol-Wind must utilize an exemption that allows certain publicly traded master limited partnerships to be taxed as partnerships instead of corporations.

It's a tricky arrangement that's often used by private equity and hedge funds to avoid taxation. A blocker corporation is set up to absorb the 35% corporate tax that would otherwise be applied to the partnership's assets. However, the corporation makes nothing, and any income made by the MLP is taxed only at shareholder level.

However, if an MLP Parity Act is enacted, the company could then be able to use a normal MLP structure, thereby allowing it to dodge extra corporate-level tax.

Long story short, Sol-Wind found a way to utilize an MLP structure despite the fact that renewable energy is still technically not invited to the MLP party.

Sol-Wind management describes the company as a growth-oriented limited partnership formed to own, acquire, invest in, and manage operating solar and wind power generation assets that generate power for retail, municipal, utility, and commercial customers under long-term power purchase agreements.

Following the completion of the IPO, Sol-Wind will acquire from its general partner equity and debt interests in an initial portfolio that represents 184.6 MW of nameplate capacity solar and wind power generation assets in the United States, Puerto Rico, and Canada.

Currently, the company is planning to issue 8.7 million shares at between $19 and $21 a share. At the high end, this would give it a fully diluted market value of $401 million.

Although it's still yet to be seen how Sol-Wind will compare to other alternative energy yieldcos, it'll be interesting for investors to see how the MLP model performs in this particular case.

Definitely keep a close eye on this one.