Investing in the Shroom Boom With These Psychedelic Mushroom Stocks

I started off the day with a great CrossFit workout, treated myself to a nice lunch, and then took some psychedelic mushrooms and went on a three-hour hike in the Adirondacks. The latter was my favorite part of the day. :)

I don’t typically do mushrooms a lot.

For me, they really are a “special occasion” kind of thing.

Moreover, I don’t see mushrooms as a party drug. Instead, I treat mushrooms more like medicine: only to be taken when needed.

Every year on my birthday, I get a bit emotional and sentimental.

It’s not that I have a problem getting older. It’s just that on birthdays, I tend to look back on all the good times I've had and wish for them to return.

Such a thing is foolish, though.

You can never properly recreate your happiest memories. And if you try, it often leads to miserable failure. Then what's left is disappointment and sadness.

But when I take mushrooms, all that stuff — that psychological clutter — disappears.

All the mental dust and cobwebs vanish and my brain resets — kind of like when you reboot your computer, and your central processing unit just works faster and more efficiently.

Now, I know some folks — because of years of propaganda and absurd myths about the dangers of entheogens — have negative opinions about psychedelics. But the fact is many psychedelic substances have been around for centuries and used commonly as legitimate medicine.

Back in the 1960s, before President Nixon declared the war on drugs, a lot of very promising research on psychedelics and mental health was being conducted. Some of that research continued underground for many years, too. But these days, psychedelics are back out in the open and about to change the entire landscape of mental health.

Another Crisis, Another Opportunity

If you’re a regular reader of these pages, you’ve likely read my analysis on psychedelics and mental health.

You’ve read about some very promising research being done at Johns Hopkins University, where depression and addiction are being treated with psychedelic mushrooms.

You’ve read about how the FDA has actually been fast-tracking clinical trials where psychedelics are being used to treat PTSD, depression, anxiety, and addiction.

And, of course, you’ve read about some of the public psychedelics companies we’ve already invested in, including this one, which has already delivered a gain of 632%, with another 212% expected inside the next six months. 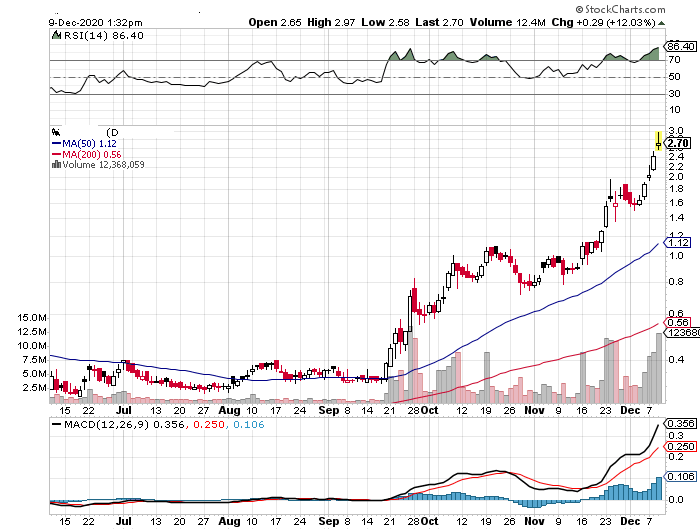 The bottom line is that the U.S. is dealing with a mental health crisis of epic proportions, and it’s only being exacerbated by COVID-19.

Certainly, I wish harm to no one, but with this mental health crisis sinking its teeth into our nation at an alarming rate, I’d be a fool not to seek to profit from new mental health treatments the government is now pushing for.

It’s hard to believe that we went from an all-out prohibition on psychedelics back in the 1970s to a rush to get the FDA to approve new psychedelics treatments for mental illness.

But that’s exactly where we are. And no investor in his right mind would ignore this opportunity.

You know, the global behavioral health market is valued at about $200 billion. And that number increases by the day.

As you saw in the chart I just showed you, it’s already paying off big-time. And we haven’t even begun to scratch the surface on what this industry is about to deliver for investors who have the courage to get some of this action before Wall Street comes running.

In fact, in my latest investor note, you can see for yourself what kind of profits we’re talking about here. I guarantee it’s like nothing you’ve ever seen before.

I also put together this special report on psychedelics, which includes access to the names of the psychedelic stocks I’m currently most bullish on.

Unless you hate money, I strongly recommend you not only read this report right now but start loading up the boat. Because the quicker you get in, the more money you’re going to make.