Investing in the End of Gasoline and Diesel Demand

I know this is not a popular opinion, but I’m going to say it anyway…

He said that it was unacceptable, calling those profits "a windfall of war."

"I think it’s outrageous," [Biden] said. If they passed those profits on to consumers, gasoline prices would be down about $0.50.

The oil industry "has not met its commitment to invest in America and support the American people." They’re not just making a "fair return"... They’re making profits so high it is hard to believe.

I don’t know who needs to hear this, but a sitting president has no right to determine what is or is not a fair return for a public or private company.

The bottom line is that oil companies — unless nationalized — don’t have a responsibility to anyone but their shareholders.

And I don’t say this as a Big Oil apologist, either.

I’ve never had much love for the Big Oil machine. If you’re a regular reader of these pages, you know I’ve actually long been a fan of electric vehicles — not just as an investor who profited handsomely from the rise of Tesla (NASDAQ: TSLA) but also as someone who’s a bit tired of our reliance on oil resulting in price swings of nearly every single thing we consume: food, clothing, medicine, etc.

Make no mistake: These price swings are significantly tied to our overreliance on oil.

But that overreliance is about to come to an end.

The Peak Is Upon Us

According to Bloomberg, gasoline demand is set to peak in less than four years as a result of fuel efficiency improvements to internal combustion vehicles and, of course, the rapid proliferation of electric vehicles. Diesel demand is set to peak a little later, in about six years. Significant declines for both begin in about seven years. 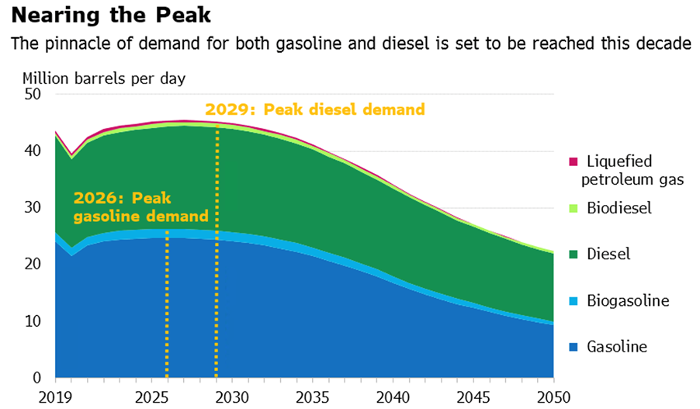 By 2050, almost 2.4 billion zero-tailpipe-emission vehicles on the road are expected to eliminate 31 million barrels a day of road fuel demand. Consumption is expected to remain above 20 million barrels a day, driven by hard-to-abate sectors such as trucking. Booming freight will support truck fuel consumption through to the 2030s even as corporations with large fleets switch to electric trucks to achieve net-zero goals.

We’ve already begun to profit from the switch to electric trucks, by the way, with this company, which has been racking up some pretty significant government contracts.

It's also worth noting that unlike a number of other electric vehicle plays that aren’t even generating revenue yet, in its most recent quarter this company saw a 27% increase in total revenue ($74.6 million compared with $58.5 million in Q2 2021), a 93% increase in battery production, and had more than $500,000 in cash and cash equivalents.

No matter how you slice it, the data is clear.

The peaking and decline of gasoline and diesel demand are locked in — and they're going to come a lot faster than most folks realize.

So you might as well make a ton of cash along the way.