On April 30, Tesla (NASDAQ: TSLA) Will Change the World!

On the 30th of April, everything is going to change...

Because Elon Musk says so.

OK, maybe he didn't actually say that, but he did recently reveal that on April 30th, he'll be making a major announcement about a new product that is NOT an electric car.

Most analysts have suggested that the announcement is regarding the release of what could ultimately be a game-changer for the solar industry — a game-changer that, if it delivers the way the Tesla Model S has delivered on performance, design, and efficiency, could catapult Tesla into one of the most powerful companies in the world.

Because if this product release is what so many Elon Musk worshipers expect it to be, Tesla could actually end up being the biggest energy company on the planet. Bigger than GE, Duke Energy, and Exelon combined.

That's not to say these companies would go belly-up anytime soon. But their death knells will be ringing.

Following this announcement, Tesla jumped about 3%.

Now check out what Musk said during an earnings conference call last month:

We're going to unveil the Tesla home battery, the consumer battery that would be for use in people’s houses or businesses, fairly soon. We have the design done, and it should start going into production in about six months or so. We probably got a date to have sort of product unveiling, it’s probably in the next month or two.

Now, I suppose there are any number of applications for a home battery that could run your entire house for days at a time. But mark my words: This is aimed at the solar market, which is growing like a beautiful, unstoppable weed. 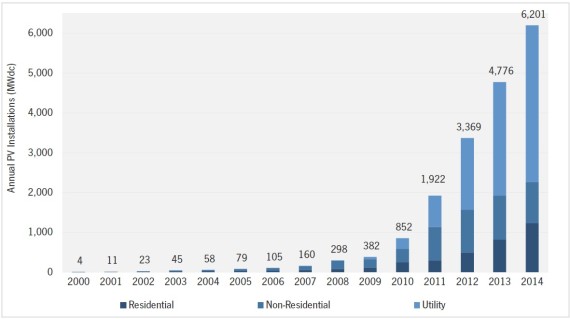 Although solar can save you a boatload of cash over the life of the system, in most cases it's still tied to the grid. This means that if the grid goes down, your power still goes out.

But what if you could harness that power during the day, then utilize that power after the sun goes down?

Essentially, with such a system, your utility would become superfluous.

Now, it's not as if this option doesn't exist now. But in order to store your own power, you need lots of batteries and lots of storage space. It's very expensive, not particularly efficient, and aesthetically offensive. 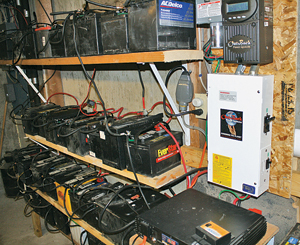 But the way Musk describes it, the new Tesla home battery pack would be similar to the Model S pack: something flat, five inches off the wall, wall-mounted, with a beautiful cover, an integrated bi-directional inverter, and plug and play. This is a far cry from what you see to the right.

I can just imagine something attached to a wall, almost like a piece of art. Because that's how Musk thinks.

But forget the aesthetics for a moment. Think about what this would do to the solar industry.

All of a sudden, all those people with solar, or about to go solar, can disconnect from the grid. They can turn their homes into their own power plants. This is huge, and solar providers would have one more selling point to offer customers. A big selling point!

I suspect SolarCity (NASDAQ: SCTY) would benefit first, as the company is genetically tied to Tesla. The company's CEO, Lyndon Rive, is Elon Musk's cousin, and Musk himself is the chairman of SolarCity.

But this is good all around, as any solar producer would see yet another increase in consumer demand. SunPower (NASDAQ: SPWR), First Solar (NASDAQ: FSLR), and SunEdison (NYSE: SUNE) will all drink from the same fountain of fortune.

I'll be there with my straw, too!