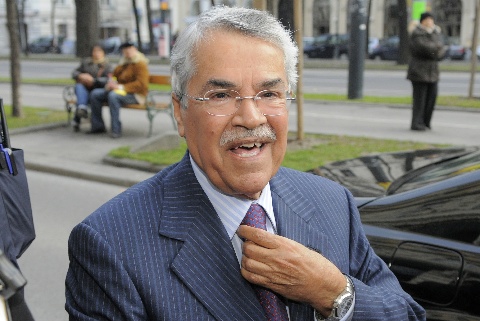 You probably wouldn't recognize him if you saw him on the street.

Heck, you probably don't even know his name.

But Ali Al-Naimi is one of the most powerful men in the world.

As the Saudi oil minister and chairman of Saudi Aramco, Al-Naimi is not particularly popular with U.S. oil producers, especially after telling the media he didn't care if oil prices crashed to $20 because it was not in the interest of OPEC producers to cut production — regardless of price.

Still, he remains the most influential oilman on the planet. Listed as one of Forbes' 50 most powerful people in the world, Ali Al-Naimi may not feel the love in Texas, but his influence is unquestionable.

So last week, when he made the following statement, the gatekeepers of the global energy economy blinked...

I believe solar will be even more economic than fossil fuels.

And he calls himself an oilman!

One of these days...

Sarcasm aside, Al-Naimi is right.

One of these days, we're not going to need fossil fuels.

We're not going to need gasoline or diesel to fuel our vehicles because in the future, our vehicles will not be reliant upon outdated internal combustion technology.

We're not going to need coal or natural gas to juice up our grid because those resources will simply be too expensive and environmentally burdensome to rely upon.

But let me assure you, dear reader, that this “one of these days” scenario is pretty far off.

Although I'm without a doubt one of the biggest advocates for transitioning our energy economy to one that is primarily built on cleaner energy, moving from a fossil fuel-dominated world to a renewable energy-dominated world will take more than 25 to 35 years.

Renewable Energy is the Future

Don't get me wrong; this transition is well underway. And those making the important investments in renewable energy today will be the dominant energy providers of tomorrow.

Don't think for a second that companies like Tesla (NASDAQ: TSLA), Google (NASDAQ: GOOG), and Apple (NASDAQ: AAPL) are embracing cleaner energy because they're run by a bunch of tree-huggers.

Renewable energy IS the future, and embracing it in its earliest stages is little more than a very smart investment decision.

By the end of this decade, solar will be competitive with all forms of fossil fuel power generation in nearly every city, town, and neighborhood on the planet. In some places, it's already there.

New developments in energy storage are not 50 years away — they're here today. In another 10 to 15 years, innovations like Tesla's Powerwall will be ubiquitous.

Electric cars — not even representing 1% of all the cars on the road today — will conquer 20% of the entire new car market in less than 15 years.

By 2030, we'll be moving people and freight at speeds in excess of 500 miles per hour using hyperloop technology. Centuries-old rail systems will find new homes in museums, and short-range air travel will become almost non-existent.

Even with all of these wonderful and exciting innovations that will move us forward as a global society, it's highly unlikely that all of the world's energy needs in 2050 will be met without the inclusion of fossil fuels.

That being said, the demand for fossil fuels is definitely going to decrease dramatically, and in a relatively short amount of time.

Your Grandkids Will Thank You

As far as transportation is concerned, I suspect that by 2050, they won't even be building internal combustion passenger vehicles anymore. Economically, environmentally, and socially, they just won't make sense.

Electric cars and high-speed travel (powered almost exclusively by renewable energy) will be the norm, new drivers won't even know how to put gas into a gas tank, and guys like Elon Musk and Jigar Shah will be in the history books as the most influential inventors and entrepreneurs of the 21st century.

Well, if you approach investing as a long-term, sustainable avenue for wealth creation, do yourself a favor and commit at the very least a small portion of your portfolio to renewable energy. You'll be happy you did, and your grandkids will thank you — not just for the fat inheritance, but for the clean air and water, too!