You know what they say...

The devil is in the details.

And investors looking to get rich in the legal cannabis market would be wise to pay attention to the details of new legalization measures before those measures become law.

This, dear reader, is the secret to pot stock profits.

THIS is how you get rich in the legal cannabis market

For nearly five years now, I’ve been helping investors make millions by investing in the right pot stocks before they become headline news.

For instance, it was back in 2016 when I recommended investors buy shares of a Canadian cannabis company called Canopy Growth Corporation (TSX: WEED) for $1.60 a share.

At the time, few investors were paying attention to the inner workings of the Canadian legislative process that was seeking to legalize cannabis across the entire country.

Back then, I was meeting with political operatives in Toronto, Vancouver, and Montreal, getting the scoop on Canada’s path to legalization.

It was blatantly obvious that the stars were aligning and Canada would soon legalize the adult use of cannabis. That’s when I went on a buying spree. Not only buying shares of Canopy Growth Corporation, but also buying shares of two other Canadian cannabis players, Aphria, Inc. (TSX: APHA) and OrganiGram (TSX-V: OGI).

It didn’t take a rocket scientist to know that once the path to legalization was announced and vocally supported by the new prime minister, these stocks were going to the moon. And that’s exactly what happened.

Here’s how this worked out for Canopy Growth Corporation... 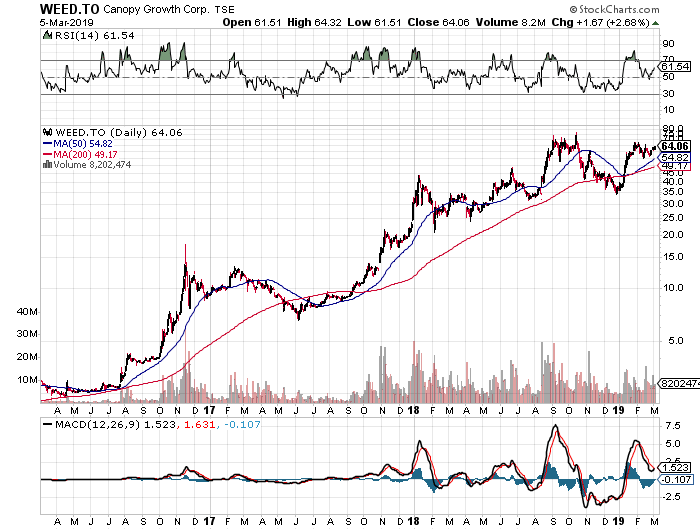 Those who bought this stock on my recommendation watched the value of their shares soar more than 3,015%.

Of course, the reality is that the big run on Canadian cannabis stocks is over. You’ll never see those kinds of gains again in that market. But you will in the U.S. cannabis market.

Just as I did prior to Canada legalizing cannabis, I’m now laser-focused on the U.S. cannabis market — where the prohibition on cannabis will be fully repealed within the next two to three years.

The time to buy these stocks, however, is now — before this happens.

Now the interesting thing about the U.S. market, is that there are far more opportunities to profit here than anywhere else in the world — including Canada — because individual states that are legalizing present multiple opportunities to make a ton of cash.

The state of New Jersey has been trying to legalize cannabis for the past two years. And the entire process has been painstakingly slow. But we recently got a bit of intel that indicates New Jersey is closer than ever.

You see, it was just announced that the governor of New Jersey, Phil Murphy, has included legal cannabis revenue in his budget proposal — $60 million to be exact.

Folks, you don’t include specific revenue numbers in a budget proposal unless those revenues are virtually guaranteed.

Make no mistake: The state of New Jersey is going to legalize this year, and there are a number of stocks that are going to get a very nice bump once this happens.

One of those companies is MariMed, Inc. (OTCMKTS: MRMD), which already has exposure in the state. I actually recommended this one to members of my Green Chip Stocks investment community already. Here’s how that stock has performed since that recommendation... 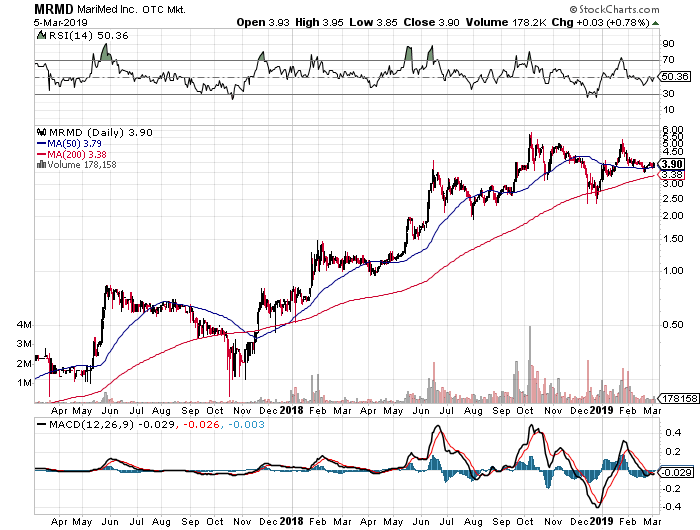 Another state to keep a close eye on right now is New York.

In fact, I would argue that the New York market is the most important, as this market is expected to be worth more than $3 billion a year once legalization is approved. And that’s also going to happen this year.

Now as you can imagine, I’ve also identified the stocks that are going to get the biggest boost once legalization is approved in New York.

You can also check out a list of all the other states set to legalize over the next couple of years — along with the names of the public companies that already have exposure in those states — in this report.

Although the past few years have been absolutely tremendous for early pot stock investors, the truth is, we’re just getting warmed up. And if you have any sense about you, you’ll get a piece of this action, too.