It kind of freaked me out.

I was too young and inexperienced to fully understand what this molecule was and how it worked.

I tried it again in college and then a few more times in my early 20s.

Not to the point where I continued to use it, though.

Of course, I’m speaking about LSD from the perspective of a person who used it recreationally.

But the truth is LSD is proving to be an amazingly effective treatment for everything from depression and anxiety to post-traumatic stress disorder and ADHD. At least that’s what the latest research is showing.

Of course, most folks still think of LSD as a dangerous hallucinogenic drug, something for hippies and drug addicts. But what we’re finding now is that it could be one of the biggest, most disruptive medications the mental health industry has seen in 50 years.

And with market disruption comes a huge opportunity to get rich.

This LSD Company Is Already up 728%

There are a number of psychedelics companies that are now researching LSD to be used for a variety of mental health issues.

Perhaps the most well-known is MindMed (OTCBB: MMEDF).

This is a company that’s developing a nonhallucinogenic form of LSD that can be used to treat ADHD and anxiety.

If MindMed sounds familiar to you, it’s probably because I told you about it last year, before the stock soared 728%. 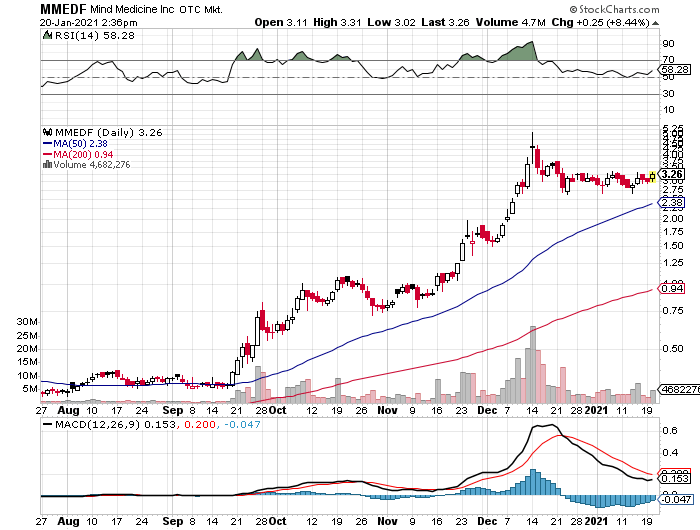 Members of my Green Chip Stocks community got in on my recommendation at $0.39.

Now, while I know this is an impressive gain (and it’s not even close to how much this stock will be worth by the middle of this year), there’s a much bigger picture here.

I also have a lot of friends and family members who battle addiction on a daily basis.

Sadly, some have actually lost that battle.

So when I write to you about new psychedelics companies creating potentially life-changing treatments for various mental health conditions, understand that it’s bigger than just triple-digit gains.

For me, it’s personal.

And to be honest, I don’t think I know a single person who doesn’t struggle with anxiety, depression, or addiction — or at least know someone who does.

It’s not a pretty picture.

So when I do my due diligence on these companies, it’s actually something I really enjoy.

I love seeing the latest research.

I love interviewing people who have been cured of addiction and depression after taking part in clinical trials using these psychedelic molecules.

Bottom line: It just feels really good to be able to make a boatload of cash by investing in companies that you know are making the world a better place by creating new treatments that are going to help so many people.

And this is why I personally invested in MindMed, as well as a number of other psychedelics companies that are just crushing it right now.

I should also note that in about a week or so, I’ll be recommending a new psychedelics stock that I believe will deliver similar gains to what we’ve already seen with MindMed.

If you want me to email you the name of that company, just click here and become a member of my Green Chip Stocks community today.