Proppants and what they can do for you

If oil is black gold, then “frac sand” is gold dust. The fracking boom in America could not advance nor even exist without frac sand or its synthetic imitations. The mining, processing, shipping and transloading of frac sand has become a whole new gold rush unto itself.

Producers and shippers are tripping all over themselves to get a bigger piece of the frac sand action:

• Proppant producer Carbo Ceramics (NYSE: CRR) has recently been upgraded to “overweight” by Capital One Financial.

But what’s the fuss all about? Why is frac sand so important? And isn’t there something about it being a cancer producing carcinogen?

Frac sand plays a critical role in the oil and gas extraction process known as fracking.
When an oil or gas well is depleted and abandoned, it isn’t completely dry. While the easily accessible oil and gas have been extracted, large quantities still remain trapped within rock that is less porous, locked within the more solid rock.

As shown in the diagram below, the fracking process injects highly pressurized water into this less porous rock, creating cracks and causing what few pores there are to open up, allowing for the trapped oil and gas to seep out. 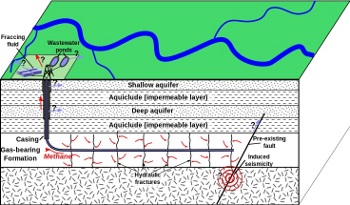 To keep the fractures and pores open, the injected fluid needs to contain “propping” particles that remain lodged within the cracks and pours, keeping them propped open so the oil and gas can flow out. While some manufacturers produce synthetic “proppants” made of ceramic beads, aluminum beads and sintered bauxite, the most widely used proppant is frac sand.

Frac sand is primarily composed of silica quartz found in sandstone deposits that have been extensively eroded, giving its grains the nicely rounded and spherical shape necessary for oil to flow more easily around them. It is also extremely dense and hard, which allows it to withstand the tremendous pressures within the rock that would pulverize ordinary sand.

Silica sand has always been in demand in glass, ceramics, foundry molding, abrasive blast sand, chemicals, fillers for rubber and plastics, even on golf courses in those nasty sand traps. But fracking has rapidly become the largest use of silica sand, which the U.S. Geological Survey puts at 57% of all U.S. silica sand production.

As the USGS noted, “Increased demand for hydraulic fracturing sand in support of production of natural gas from shale gas deposits has led to production capacity upgrades and ongoing permitting and opening of numerous new mines.”

It has also lead to the recent expansion of numerous players vying for a bigger section of the frac sand sandbox to play in.

As most of the better quality silica mines are located in the southern Great Lakes states of Illinois, Indiana, Iowa, Kansas, Kentucky, Minnesota, Michigan, Missouri, Nebraska and Wisconsin, there you will find the greater number of frac sand refining plants.

Once the sand is washed and dried, the grains are sorted according to size typically ranging from 0.1 mm to as much as 2 mm. Oil and gas wells often require specific sized grains, most ranging from 0.5 mm to 1 mm in width.

There is even a premium quality frac sand that is coated with an oily resin that allows crude oil to slip past more easily. U.S. Silica noted above announced yesterday it has just completed modifications to its resin-coating facility in Rochelle, Illinois, enabling it to produce more of this higher-priced premium frac sand.

Canadian-based Rainmaker Mining has scored a prime silica mining property in its partnership deal with Zimtu Capital for 50% ownership of a deposit in the Peace River region of the Canadian province of Alberta. It’s prime location next to one of the largest oil sands deposits in the world will make this operation highly efficient.

“The acquisition of these four claims adjacent to a current producer of frac sands is a highly significant addition to our growing portfolio of properties,” announced Rainmaker Mining Vice President Chris Healey. “The claims are well located relative to several markets, and have excellent access to rail, giving Rainmaker a significant competitive advantage in this rapidly expanding market.”

Transloading Booms With It

Of course, not all silica mines are so conveniently located to where frac sand is needed.

While oil and gas deposits cover vast portions of the U.S., the regions which need frac sand the most (known as “tight oil and gas deposits” because the oil and gas are locked tightly within rock of low permeability) are mostly concentrated in North Dakota, Wyoming, Colorado, Texas, West Virginia and Pennsylvania, as indicated in the map below. 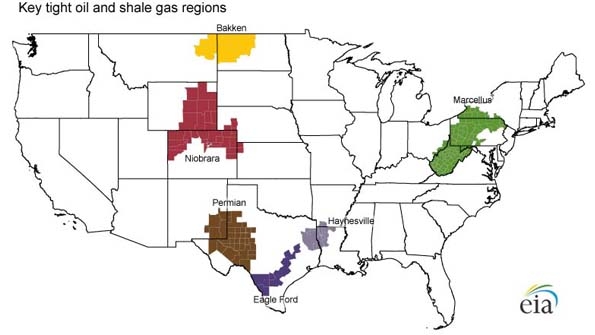 This requires a vast network of transloads – transport junctions where freight is switched off of one transportation network onto another. As can be noted on the following map of U.S. Silica production and transloading locations, there is a lot of room for expansion and improvement, especially into the Midwest. 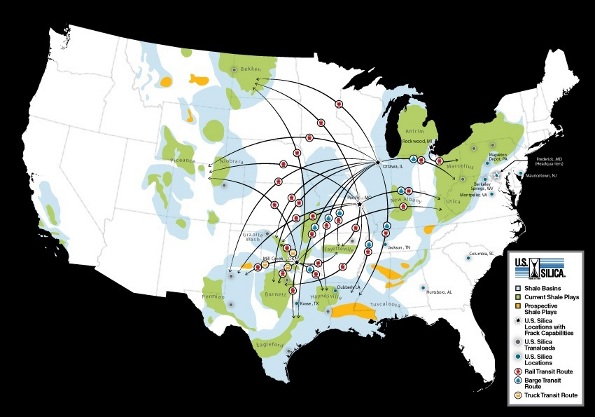 Source: US Silica filing with NASDAQ

This makes the purchase of frac sand supplier Frac Resources LLC by logistics firm Enserco Midstream LLC quite prudent. Through this acquisition, Enserco gets two strategically located shipping depots in San Antonio and Laredo – right in the heart of southern shale country.

“We locate, evaluate, consult, test, and market, the highest quality ceramic proppants that are used in the gas and oil industry, on a worldwide basis… and develop transload opportunities within the shale plays,” Frac Resources explains its services.

“Fracking is currently used in 90 percent of North America's natural gas and oil wells,” the company quantifies the demand for its services. “On average, it takes 44 rail cars of product and commodities to build out an oil well and bring it to production. 60% of those rail cars handle proppants. These transloads must be designed in such a way to be extremely efficient with the least amount of waiting trucks as possible.”

A strategically located network of transloads is the frac sand shipper’s ultimate quest. “High quality natural sands that are located on a full scale transload has become the new gold rush of the twenty first century,” the company proclaims.

For this reason, “Frac Sand Resources is interested in expanding its reach into delivery of these proppants and other upstream and midstream products to the well head to all parts of North America - and the world, for that matter - via rail or barge.”

Frac Sand Will Not Go the Way of Asbestos

But what about the health risks associated with silica sand dust? Protestors are already up at arms!

“Some 75 civic and environmental groups have endorsed a resolution started by the Wisconsin Network for Peace and Justice that calls for a ban on frac sand mining and a halt to a bill that would strip the ability of local governments to regulate the booming industry,” reports The Capital Times. The resolution was delivered to Governor Scott Walker and members of the state Legislature in early January.

The concern comes from the danger of inhaling fine silica dust particles that can travel through air for some distance. Once inside the lungs, the dust coats the capillaries which impedes the intake of oxygen into the bloodstream, and can also cause silicosis, bronchitis, even cancer.

But in 2013, the Occupational Safety and Health Administration (OSHA) imposed stricter standards for workers handling silica, reducing maximum exposure amounts from 250 micrograms per cubic meter to 50.

Yet the hazards associated with silica dust are not comparable to those of asbestos, a mineral whose fiber-like crystals similar to fibreglass cause serious illness if inhaled, and has long been banned. Where asbestos once came into close contact with the general population through its use in wall and roof insulation, frac sand dust will only be found in silica processing plants, and can be controlled as any other dangerous workplace substance.

With fracking rapidly becoming America’s greatest means to energy self-sufficiency, frac sand’s integral role in the extraction process will make it a hot commodity for decades to come – putting its producers and shippers high on any energy portfolio’s “hot stocks to buy” list.