Sometimes sales people are too good for their industry.

Electric utility company Southern Co. (NYSE: SO), for example, managed to convince the state of Mississippi that it was going to revolutionize coal-fired power generation.

This ultra-modern power plant would capture 65% of its carbon dioxide emissions and pipe them deep underground into oil wells to aid in the extraction of harder to reach oil deposits. Essentially, it would be using pressurized carbon dioxide to squeeze the oil out.

In so doing, two-thirds of the plant’s CO2 emissions would be disposed of underground where they can’t harm the Earth’s atmosphere.

However, on April 30th, the company not only pushed the plant’s opening date back an entire year to May of 2015, but it also raised the cost for a fourth year to $5.5 billion — more than double the original estimate.

The reason for this latest cost increase? CEO Thomas Fanning chalked it up to “early miscalculations.”

There are already 62 miles of piping as it is. The new, heavier piping — and more of it — would mean reinforcing the entire support structure.

But there is more to it than just the piping. The entire supply chain is sporadic, unreliable, and still very expensive. Greater than anticipated labor costs, shortages, and “inconsistent” quality of equipment and materials, as well as contractor and supplier delays...

The technology is so new that the industry doesn’t quite have its act together just yet.

Southern’s sales team did a really great job selling the project. But the company can’t seem to deliver, leading some to question whether clean coal power plants are really all they’ve been hyped to be.

What makes the Kemper County clean coal power plant’s outcome so crucial is that the plant is being used as a poster child for a new environmental initiative to reduce greenhouse gases in the generation of electricity.

But it's turning out to be a complete flop.

Fanning asserts the Kemper County clean coal plant is “going to be the cleanest coal plant in the world,” reducing coal plant carbon emissions by 65% to just 618 pounds of CO2 per megawatt-hour of electricity produced — less than even a natural gas plant’s 850 pounds per MWh, as noted in the graphic below. 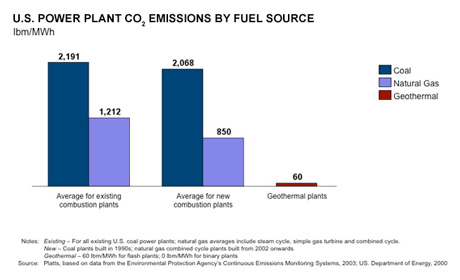 Yet at $5.5 billion to construct — and still growing by $25 million a month, on track to reach close to $6 billion by the time it opens next year — the Kemper plant’s cost makes it a poor alternative to existing low-carbon technology already in use, such as natural gas, wind, solar, nuclear, and geothermal.

Let’s run a comparison of the Kemper clean coal plant’s cost per hour of electricity produced alongside the costs of the alternatives. We’ll even give Southern Co. a break and use the original cost estimate of $2.4 billion when construction began in 2010. 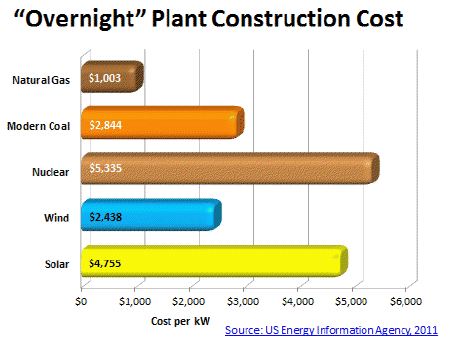 As a further comparison, the Kemper plant is 411% more expensive than a natural gas plant’s $1,003 cost per kilowatt capacity — more than quadruple!

Let’s not forget geothermal plants that use the Earth’s own underground heat to bring water to a boil and turn turbines with its steam, which cost about the same per kWh as wind. For the same price as 1 kWh by clean coal, you can get 1.67 kWh by geothermal with only 10% of the emissions.

Process Still in its Infancy

The problem with capturing carbon dioxide gases is that the particles are much too small for the typical screens and filters that are currently being used to filter other particles, such as mercury and sulfur.

Another electric power utility company, American Electric Power (NYSE: AEP), tried years ago to capture CO2 with an experimental plant in New Haven, West Virginia but abandoned the project for similar issues to those plaguing Southern Co.’s Kemper plant: it was just too expensive.

If anyone can find a way to burn coal cleanly, perhaps it might be China. Eager to gain the upper hand over its Western rivals in science and technology, the Chinese government is funding extensive research into the challenge.

A joint research project between a Chinese power company, Huaneng, and the government’s Thermal Power Research Institute is already declaring victory in being able to capture carbon emissions for just $16 per ton of gas.

But after four years of continuing experimentation, we’re still no closer now than we were then. As Duke Energy chief technology officer Dave Mohler, who collaborated on the Chinese project, quickly realized, “It turns out that $16 a ton is with Chinese materials, Chinese labor — and Chinese accounting.”

With few options available for capturing carbon dioxide cost-effectively, coal plants will have to be creative and find other means of covering their costs.

Southern Co. believes it has found a way to do just that by selling its captured CO2 gas to oil companies that inject it into their wells to help extract those hard-to-reach oil leftovers.

But for this to be effective, an entirely new pipeline network would be required, as most coal plants are not conveniently situated next to depleted oil wells in need of that extra flushing power.

Energy Secretary Ernest Moniz noted that it would take “a kind of a horseshoe that connects the Midwest down to the gulf region and go to Texas and up to the Rockies” in order to properly connect together coal mines, coal plants, and older oil deposits.

“Then,” Moniz continued, “the question is: Is there going to be enough activity and carbon capture to build a pipeline with lots of feeders and off-take?”

So even when the industry has found a means of offsetting its carbon capture costs, getting all that infrastructure in place is going to cost even more. You have to wonder if clean coal carbon capture plants are really worth it, given the cheaper alternatives that are already reducing CO2 emissions without requiring any additional infrastructure investments.

This has always been my argument against “clean coal.”

Why are we jumping through hoops in an effort to make a dirty power source cleaner when there are plenty of cleaner power sources already available — and at a much cheaper cost?

Understand that I'm not knocking coal, and I think efforts to regulate emissions on coal while not regulating dozens of other major sources of CO2 is further proof that the government can't break its habit of picking winners and losers. And folks, this is a very dangerous habit.

It's the reason we continue to subsidize the hell out just about everything, thereby buying into the illusion that the price we pay for our electricity or our transportation fuel represents the actual cost of production, distribution, and consumption.

It's all a ruse. And it's you, dear taxpayer, who's left on the hook for every single government failure that keeps us reliant upon inferior forms of electricity generation, transportation fuels, and technology.

In any event, as I've said before, don't buy the clean coal lie. It doesn't pencil out, and it doesn't make coal “clean,” as it fails to address the production and distribution of the actual resource. So I would caution against investing in any clean coal scam you may uncover.

If clean energy is your bag, just stick with the basics — wind, geothermal, solar, and energy efficiency.

Investing in Solar Technology
GE and Google seem to like this new solar technology. But the company behind it may fall flat, not because the technology isn't relevant, but because the goal is simply unreachable.
Investing in Energy Efficiency and Solar
If you're looking for an easy way to play the modern energy space, look no further than energy efficiency. President Obama's executive actions will lead to profits... if you know where to look.
Hydrogen Fuel Cells: The Downfall of Tesla?
Lithium has been the front-runner in the battery technology market for years, but that is all coming to an end. Elon Musk is against them, but Jeff Bezos is investing heavily in them. Hydrogen Fuel Cells will turn the battery market upside down and we've discovered the tiny company that is going to make it happen.