Forget Tesla, THIS is the Ultimate Electric Car Stock

Governor Jerry Brown is a hero to progressives and a villain to conservatives.

But to me, he’s little more than a prime source for invaluable investment intelligence.

Under the terms of the executive order, $2.5 billion is about to be ponied up for 250,000 new electric vehicle charging stations while calling for the state to commit to getting 5 million zero-emission vehicles on the road in just 12 years.

As a side note, some folks have included hydrogen vehicles in this “zero-emission” mandate, but the reality is that nearly every one of these 5 million zero-emission vehicles will be electric.

To put this into perspective, today, the Golden State is home to about 350,000 electric vehicles. In order to get to 5 million, you’re looking at a compound annual growth rate of 24.81%.

But even with this new executive order, California still isn’t the biggest market for electric vehicles.

This year, 2 million electric cars will be sold, and by 2020 that number will reach 3.4 million.

And it doesn’t stop with electric cars.

This year, the city of Shenzhen’s entire bus fleet will be electric. And this is a huge fleet. We’re talking a total of 14,200 electric buses.

To put that in perspective, the largest bus fleet in North America is in New York City, where 5,700 buses run on a daily basis. 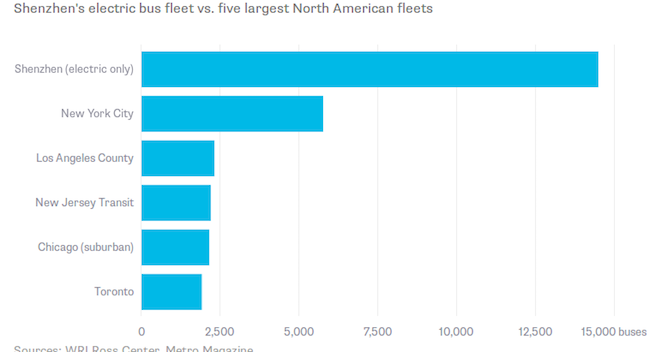 Of course, Shenzhen is just one city in China. If you look at the entire country, you’ll see even bigger numbers. In fact, last year, China’s total electric bus sales reached 116,000.

Make no mistake — for those looking to make a few bucks in the electric vehicle space, China is a cash cow.

There are any number of ways to play the electric vehicle boom in China.

But perhaps the best way is through a Chinese company that few in North America even know about.

Say what you want about how China operates or subsidizes its biggest corporations; the bottom line is that if you’re running a company in China and you’re not in bed with the government, you’re never going to amount to anything.

It’s just how it is. I’m not saying this is right or wrong. I’m simply stating this as an observation of truth. I also say this as an investor who’s made a lot of money by investing in the right Chinese companies.

I’ve done it in the past, and I’m going to do it again. And this time it’s going to be with this under-the-radar Chinese electric car company that my colleague Chris DeHaemer recently clued me in on. He calls it the “Ultimate Electric Car Stock.” I call it my next triple-bagger.

Of course, when it comes to this particular company, Chris is the expert, so I’ll let him tell you more about it tomorrow. Keep an eye out for that email.