Investing in 2021: How to Turn Fear Into Opportunity

Just before our office closed for the holidays, I had the pleasure of sitting down and talking about the state of the markets heading into 2021 with the founder and president of Angel Publishing, Brian Hicks.

These thoughtful discussions I have with colleagues are hands-down one of my favorite parts of the job. It’s incredibly rewarding to listen to and discuss ideas with top-notch analysts and then leverage our collective wealth of knowledge and experience to help folks like you achieve their financial goals.

Which is why I wanted to share some of our thoughts with you today as we close the chapter on an unprecedented 2020.

COVID-19 Changed Many, Many Things, but Not Everything

The pandemic caused by the novel coronavirus has infected over 16 million people in the United States this year and is responsible for over 300,000 deaths. Globally the numbers are even more daunting.

The economic impact was also staggering.

According to the National Bureau of Economic Research (NBER), our longest recorded period of U.S. expansion ever ended in February. On top of that, the U.S. experienced two consecutive quarters of declines in GDP, including a steep quarterly drop of 9.1% in the second quarter of 2020. Up to that point, quarterly GDP had never dropped more than 3%, ever.

As a result, recession set in and fears of another “Great Depression” lingered in the backdrop for many months. Uncertainty was rampant.

But what did the markets do?

Nothing short of set new all-time highs, that’s what! 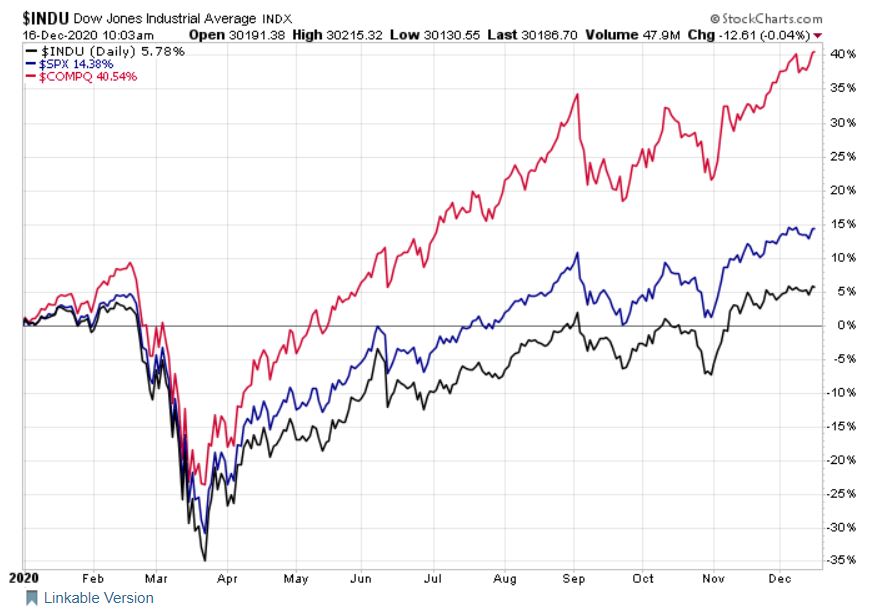 As Brian shared with me, now is the perfect time for us to turn fear and uncertainty into great opportunities.

Over his 26 years in this business, he’s survived and thrived through many financial disasters, all of which were “unprecedented.”

All of these crises were deemed “unprecedented” and rightfully so.

But in true terms of the market, Brian highlights that we’ve seen a lot worse.

During the late 1990s, for example, the tech-heavy Nasdaq lost over 50% of its value in just nine months. Then after 9/11, the Nasdaq lost another bowel-shaking 80% from its all-time high just 18 months prior.

Here’s a chart of that period for the Nasdaq:

When you put things into scale, that was a much more devastating financial crisis than what we have endured in 2020.

And when you add in the fact that markets still reached new all-time highs, as we move into 2021 it becomes clear, now more than ever, that there are great generational buying opportunities all around us.

Have a great New Year's.