The worst generation ever?

Or could that kind of thinking be a bias that's holding you back from investment success? Here's what I mean...

Despite many obvious differences between them, every generation shares core similarities. Among these similarities is a critical perspective of all successive generations.

What I mean is every generation tends to dislike their younger counterparts. In a way, there is at all times a bias against younger generations.

Now, let me stop right there for a minute...

I am not going to defend any kind of self-absorbed over-consciousness or other kind of social justice bullshit here today. Rather, I only want to point out that a bias against younger generations does, in fact, exist... and that this bias could lead to missed opportunities for investors.

The truth is, younger generations have always been the subject of criticism going back thousands of years. Both the ancient Greek Hesiod and Roman Ovid wrote accounts of what they called "the ages of man." You've probably heard of these:

These ages generally describe a successive degradation of the human condition — beginning from a time when mankind enjoyed a near-divine existence to the stage of the current writer, when men are warlike, greedy, and impious. The succession of these ages is also paralleled in every major religious text around the world, including the Bible with the Garden of Eden.

The point is, criticizing youth is not a new phenomenon. But criticism can leave investors blind to massive opportunities.

I don't know about you, but when Facebook first came out, I hated it. (I still hate it.) Zuckerberg was in his early 20s, and I thought Facebook was just another social website. Big deal! Right?

Today Zuckerberg is worth over $60 billion. He's the fifth-richest person in the world!

Bill Gates and Steve Jobs were just as young when they got started with their empires.

Hell, even Albert Einstein came up with his theory of special relativity at age 26!

Point is, there might always be something about younger generations that makes us uncomfortable. But that doesn't mean they're not cash cows. Had you bought the Facebook IPO, you'd be sitting on a +300% gain today.

Or consider Bitcoin and other cryptocurrencies...

I'm probably not alone in thinking they were a short-term fad cooked up by some young computer programmers. Meanwhile, early Bitcoin owners are sitting on gains of up to 20,000%. Bitcoin has literally made teenage millionaires. 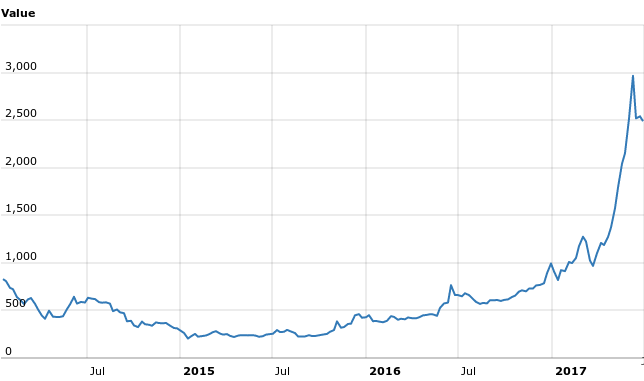 I first learned about Ethereum from a 23-year-old junior editor.

Ethereum will most likely turn out to be my personal best investment of the year. I'm sitting on a +400% gain in under two months.

Go back a little farther...

Back in the early 1980s, did you think the video game industry would be worth $100 billion a year?

I'm unsure whether people truly have a dislike of younger generations, or if they are instead simply more comfortable with what they know. Either way, this tends to lead to a bias against youth. And even though we can sometimes be uncomfortable with technologies we don't like or understand, we shouldn't let this bias get in the way of investment.

Last week, I wrote that the most hated investments tend to yield the highest returns over the long term. At the time, I was talking specifically about gold. But I think the same idea applies here.

What does the "grumpy old man" in you hate the most? Invest in that.