Investing Advice You Can Trust

Come with me for a quick look in the rearview mirror on a career of courage, risk, and outrageous market calls.

When I started Angel Publishing (the parent publisher of Energy and Capital) on January 1, 2004, my intention was to launch an entirely unique investment research company — one whose purpose was to identify trends years before Wall Street caught on and way before they entered into the mainstream lexicon.

In any event, I think we’ve been successful at meeting this goal. And it didn’t happen overnight.

You see, I had been doing this for many years prior to launching Angel Publishing.

I spent 1994–2003 with my former employer (and now competitor) honing my skills at uncovering trends well before they gained acceptance and momentum.

I would apply all kinds of metrics into my predictive models, including demographic trends, human nature, understanding the convenience of application, and plain old common sense.

And I kept a close eye on what was successful in the vice markets like pornography, tobacco, and alcohol.

To give you an idea of what I mean, Angel was the first investment newsletter company to talk about Bitcoin (cryptocurrency) as not only a viable alternative currency but also an investment.

But check this out...

At the former publishing company I worked for (Agora) and the investment newsletter I helped managed (Taipan), we were talking about the promise of a cryptocurrency as far back as 1997. 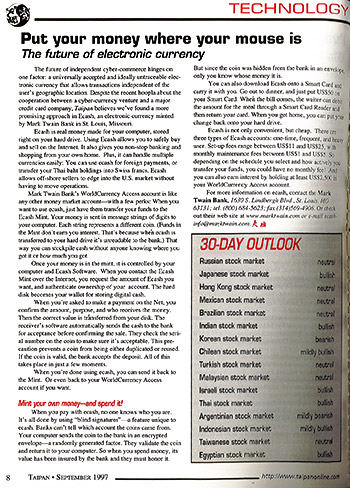 Not much came of “cyber-currency” after that article was published. But the idea of it took root. All it needed was a market to water the flower for it to bloom.

So when Bitcoin was launched 12 years later as a way for a drug dealer to covertly sell drugs over the internet, we were all over it. We knew the birth of a viable cryptocurrency was here.

And that’s just one idea where we were way ahead of the curve.

We were the first investment research outfit to bring our readers investment opportunities in the Bakken, the Eagle Ford, fracking, the Permian, rare earth metals, lithium, electric cars, wind turbines, solar, organic food, cryptocurrency, robots... the list goes on and on.

I bring all of this is up to remind you why we are so important to your portfolio. We are totally different than our competitors.

Because of our size and culture, we are not for everybody. And I’m glad about that.

We’re not vanilla. We are gunslingers.

And because of that, we are able to bring you investment ideas nobody else can. Maybe they’re not as insightful as us. Perhaps they don’t have the courage to speak their minds. Or their managing editors hold them back for fear of causing offense to the current limp-wristed snowflake culture gripping the U.S.

Whatever the case, we don’t have those hang-ups. Glory doesn’t exist in the mediocre, the safe play, or being squishy. Risk is a part of courage. And courage makes life worth living.

A great example is the recent cannabis bull market.

Our editors were talking about the economic and medical benefits of cannabis in 2013. We were laughed at.

Now, before I go any further, I need to give you a disclaimer: When my research team came to me with the idea that cannabis companies were a viable investment vehicle, I thought they were nuts. I pushed back. I even almost pulled rank as the owner to stop them from recommending these stocks.

But I didn’t. And you want to know why I didn't stop them?

Because I would be going against my own personal investment philosophy of spotting trends before everyone else and going for it.

So I let them have at it.

I’m glad I did. (Even personally, cannabis has been the best-performing asset in my portfolio. The next hit is on me.)

To this day, we are the #1 investment advisory when it comes to cannabis investing.

As you read this, Jeff Siegel is in San Francisco hosting his cannabis investment conference to a sold-out show.

And this brings me to another potentially explosive opportunity: We were also the first to bring to investors like you the opportunity of plant-based meat and foods.

Whether it’s Beyond Meat, the Impossible Burger, or cauliflower pizza crust, the plant-based food bull market is in its infancy. And more importantly, it’s here to stay.

Listen, I poke fun at vegans as much as the next Clint Eastwood fan. But the trend is the trend. And this trend is your friend.

Though the options to invest in this trend are currently limited, we are scouring the earth for plays to bring you. And true to our mission, we will have them for you... and we will have them before everybody else.

So stay tuned. It’s a great time to be alive and investing in niche markets like this.

And always remember: As an Angel reader, you’re a member of the herd leaders; we always get to the good grass first.

Brian is a founding member and President of Angel Publishing and investment director for the income and dividend newsletter The Wealth Advisory. He writes about general investment strategies for Wealth Daily and Energy & Capital. Known as the "original bull on America," Brian is also the author of the 2008 book, Profit from the Peak: The End of Oil and the Greatest Investment Event of the Century. In addition to writing about the economy, investments and politics, Brian is also a frequent guest on CNBC, Bloomberg, Fox and countless radio shows. For more on Brian, take a look at his editor's page.

Why I’m Selling Beyond Meat (NASDAQ: BYND)
Beyond Meat Looks Very Top Heavy at Current Levels
Hydrogen Fuel Cells: The Downfall of Tesla?
Lithium has been the front-runner in the battery technology market for years, but that is all coming to an end. Elon Musk is against them, but Jeff Bezos is investing heavily in them. Hydrogen Fuel Cells will turn the battery market upside down and we've discovered the tiny company that is going to make it happen.