Invest in the Lithium Revolution

This tale starts with two companies: one a household name for decades, the other a growing firm that many people — especially investors — are thrilled about.

A month or so ago, the latter firm, Tesla (NASDAQ: TSLA), announced its new energy storage system, the Powerwall.

Within a week, the company saw $800 million in pre-orders for its new product, which isn't even available yet. And now that it has nearly $1 billion in potential revenue, I assume the company will have a serious backlog for some time.

The Powerwall is meant for use in homes and will go well with Tesla CEO Elon Musk's other business venture, SolarCity (NASDAQ: SCTY), which provides solar panels for homeowners at little upfront cost. 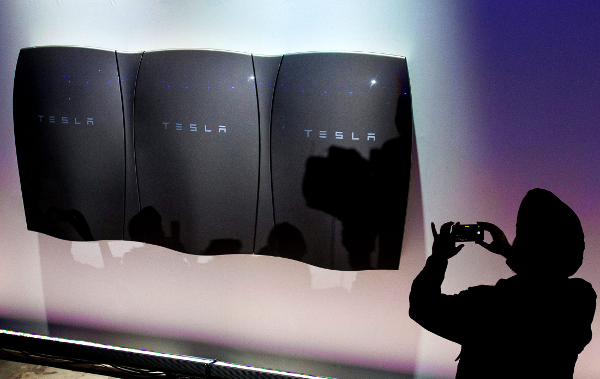 Residential battery storage allows homeowners with solar panels to store excess electricity from when the sun shines for use when the sun isn't shining and the need for electricity is greater.

It's much the same story for grid-scale storage projects. Solar and wind farms can't create power at the drop of a hat — they need the wind and the sun.

So when the wind and the sun don't cooperate, batteries take over and supply excess power to the grid, as well as prevent flickering caused by slight lapses in electricity.

But as of right now, Tesla isn't producing grid-scale storage — although I wouldn't be surprised to see it in the future.

This instead takes us to our next company: General Electric (NYSE: GE).

GE announced a month or so ago that it sold its first utility-scale storage system to a unit of Consolidated Edison (NYSE: ED) for use in California.

This battery system will store as much as eight megawatts worth of power that can be used to support the intermittent wind and solar technologies prevalent in the state.

Eight megawatts is enough to power about 6,000 normal homes, and it's only the beginning of battery storage in California and the rest of the United States.

Now, don't get me wrong — GE is not the only company manufacturing utility storage. Several other companies do the exact same thing, and it's for good reason.

California has enacted requirements for the state's three largest utilities to install 1.3 gigawatts of storage capacity by 2020. Other states, like Oregon, are working to make similar moves.

In the first quarter of 2015, 5.8 megawatts of storage capacity were added (nearly 20% higher than the same period last year), while analysts anticipate 220 megawatts will be added in the U.S. by the end of 2015.

For reference, that's well above the 62 megawatts added in 2014.

Most of this demand comes from commercial and residential installations, while utility-scale storage lags behind.

Businesses, schools, factories, and public facilities better manage the power they use on a day-to-day basis when they install battery storage systems.

But while the utility-scale battery industry has so far lagged behind, it's only a matter of time before it eclipses the residential market thanks to new power production from innovative sources...

Namely renewable energy, which has fueled the production of battery storage in a big way.

As my colleague Jeff Siegel has mentioned before, of the $7.7 trillion to be invested in new power plants worldwide by 2030, $5.1 trillion will be used for renewable plants.

Mostly wind and solar, these new renewable energy plants will need thousands upon thousands of megawatts of storage capacity provided by GE, Tesla (if it gets involved in utility-scale storage), and other battery producers.

For these reasons, it's imperative for investors of all stripes to pay attention to lithium, and quickly.

Lithium-ion batteries have become the gold standard for all types of rechargeable batteries during the last decade.

Every smartphone, every tablet, just about every laptop computer, every electric car from Tesla to Nissan, and, as mentioned, utility, residential, and commercial battery storage units all use lithium-ion batteries.

Because of this, the lithium market has gone exponentially higher...

Indeed, the 21st century has been a boon to lithium investors, as production has had to keep up with surging demand.

Of course, many value investors will look at the chart above and be wary of a top in the lithium market...

Normally, they would be right. But the projected demand for the batteries I've been talking about is enough to show a long-term growth in demand for the commodity.

Plus, I have barely mentioned electric cars, Tesla's “Gigafactory” under construction in Nevada, and other uses for lithium (like phones, tablets, etc.).

As the multi-pronged demand for lithium grows, prices of lithium-based stocks will grow, too.

The greatest fortunes of all time were made back then, and investors who wait too long on lithium will sit on the sidelines for this next wave of fortune and prosperity.

Tesla (NASDAQ: TSLA) Powerwall Investing
Despite some temporary shortcomings, Tesla's Powerwall will make affordable off-grid living a reality.
Obama's Nuclear Ambitions
Energy and Capital editor Keith Kohl delves into one of the hottest up-and-coming energy investments and shows readers how they can position themselves before the market catches on.
Investing in Renewable Energy
As the Saudis begin to transition to solar, savvy energy investors take notice.
Plains All American Assumes Fault for Oil Spill?
Energy and Capital editor Keith Kohl ponders whether Plains All American (NYSE: PAA) is a buy now that its stock has fallen.
Hydrogen Fuel Cells: The Downfall of Tesla?
Lithium has been the front-runner in the battery technology market for years, but that is all coming to an end. Elon Musk is against them, but Jeff Bezos is investing heavily in them. Hydrogen Fuel Cells will turn the battery market upside down and we've discovered the tiny company that is going to make it happen.