The World Energy Outlook 2011 is out from the International Energy Agency.

For me, the one number to hone in on is the daily projected oil demand in 2035.

That number is projected to be 99 million barrels a day.

It's best if it comes right from the Executive Summary:

Short-term pressures on oil markets may be eased by slower economic growth and by the expected return of Libyan oil to the market, but trends on both the oil demand and supply sides maintain pressure on prices. We assume that the average IEA crude oil import price remains high, approaching $120/barrel (in year-2010 dollars) in 2035 (over $210/barrel in nominal terms) in the New Policies Scenario although, in practice, price volatility is likely to remain.

All of the net increase in oil demand comes from the transport sector in emerging economies, as economic growth pushes up demand for personal mobility and freight. Oil demand (excluding biofuels) rises from 87 million barrels per day (mb/d) in 2010 to 99 mb/d in 2035.

Without other data, however, that 99-million-barrel-per-day estimate might not mean anything to you.

So let me give you the first few sentences of the very next paragraph:

The cost of bringing oil to market rises as oil companies are forced to turn to more difficult and costly sources to replace lost capacity and meet rising demand. Production of conventional crude oil — the largest single component of oil supply — remains at current levels before declining slightly to around 68 mb/d by 2035.

Your eyes should be reflecting dollar signs.

Distilled into a single sentence:

With a forecast price of $120 per barrel, a 31-million-barrel-a-day shortfall creates a $3.7-billion-a-day opportunity.

So it's worth noting where the IEA thinks that “oil” is going to come from:

The only problem with this is that it's never been done.

It's taken us 40 years to add 31 million barrels per day of conventional oil production — the easy stuff. 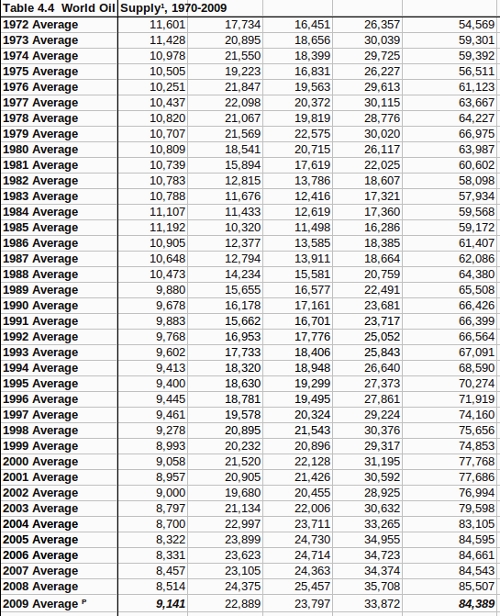 The IEA is saying we can add the same capacity in half the time using much harder-to-get resources.

It's hopeful, considering the IEA acknowledged for the first time last year that Peak Oil is real.

It's like the president saying we can pay off the runaway public debt by not raising taxes and looking for unconventional sources of revenue.

As we're already seeing, there's going to be balls-to-the-wall investment in the oil and gas sector in order to keep pace with demand.

There has to be.

The same World Energy Outlook says investment in energy infrastructure of $1.5 trillion a year is needed to meet projected demand through 2035. And even then, “the cost of energy will increase,” according to IEA Chief Economist Fatih Birol.

Birol added that investment of $100 billion a year is needed in the Middle East and North Africa to make sure their oilfields keep up with demand. If investment slips to even one-third of this level, the report warns, oil prices would jump to $150 per barrel.

All these factors are combining to make a bullish oil investment scenario.

I've been saying as much for a few months now.

You can see it in all the multi-billion-dollar mergers and acquisitions that have occurred in the past few months.

You can see it in the boomtown stories coming out of towns like Fort McMurray and Williston.

You can see it as oil hits a three-month high in the face of economic uncertainty.

You can see it in the call for $200 oil on Iranian and Israeli tensions.

And as Keith Kohl has been telling you — and showing you with big wins like on Brigham — the place to invest is in newfound North American oil wealth.

You've heard North Dakota has the lowest unemployment in the nation...