How to Profit from the Latest Find

While the Middle East may have a reputation for instability and occasional violence, there's no denying the vast riches it has to offer patient investors.

Just months after the announcement of $1 trillion worth of minerals in Afghanistan comes word of oil discoveries in Israel...

Israel may finally be able to tell its Middle Eastern neighbors where they can stick their oil — something the United States has wanted to do for years.

In one of the most sought-after parts of the world, 4.3 billion barrels of oil could be sitting in the Leviathan project beneath the Mediterranean, according to Noble Energy (NBL) and Israeli partner Delek (DGRLY.PK).

And that's in addition to 1.5 billion barrel estimates for Rosh HaAyin, just east of Tel Aviv...

Could Israel become a major exporter with these finds? Possibly...

Is there high probability of it joining OPEC with Iraq, Iran, and Saudi Arabia? Probably not...

But it does mean Israel could be within reach of the American “energy self-sufficiency” dream. As Israel is on its way to energy independence, it's most likely stirring anger among the oil hoarders of the Middle East.

But really, who cares what Middle Eastern countries think anyway?

Why patience will pay off

Israel just found one of the biggest natural gas discoveries in history and oil fields to boot. Meanwhile, we haven't even mentioned the Givot Olam onshore discovery, where 1.5 billion barrels of oil may be waiting.

Heck, if all goes well, the country could become an oil and gas exporter... see a spike in employment... and watch as its currency skyrockets (the New Israeli Shekel is now worth 26.3 cents to the dollar).

That alone would be huge for an ETF like iShares MSCI Israel Cap Invest Market (EIS), and U.S. stocks like Noble Energy (NBL).

But you have to have patience waiting on real gains.

A decision on whether Israel will drill for oil won't be made until October, when drilling for gas at Leviathan begins.

There's also the potential for violent flare-ups with Lebanon...

Debate has risen over whether the Leviathan project extends into Lebanese waters, making tension between the two warring countries even worse.

According to reports, Lebanese Energy Minister Gebran Bassil told Noble “not to work near Lebanon's maritime economic zone, saying his country would allow Israel or a company working on its behalf to take gas from Lebanon's zone.”

But Israel believes the discovery lies in its own waters:

“There is no doubt that Israel will do what it has to do” to protect the resources, say other reports. “Adequate security appears to be in place for oil and gas operations offshore Israel.”

Despite all the usual tension, I recommend buying Noble (NBL) here — and waiting.

This could pay off well with patience.

I've been in the energy trading game for 10 years now, and in that time, I've made some good money for my readers.

Below are actual gains and losses from the last three years of my stint as investment director of Pure Asset Trader...

If you hate making money, ignore this: 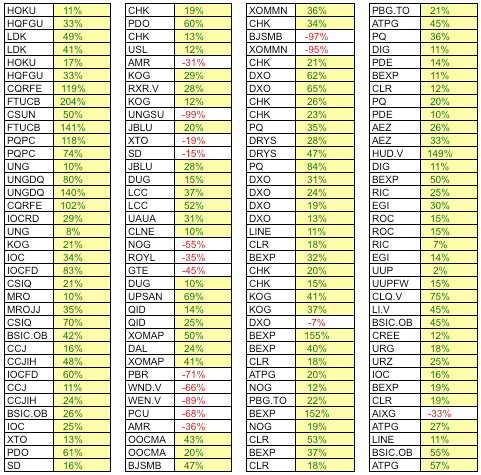 But if you're interested in profiting from a service with a proven track record...

Then be sure to read the latest report from Pure Asset Trader — hot off the presses this week.