How to Sell Drugs to 80 Million People - Legally

While the state’s population only clocks in at around 3.6 million, the location of this latest “legal state” is of particular interest.

Although it’s taken longer than some other states, including California and Colorado, with Connecticut now “legal,” a new NorthEast hub of legal cannabis is developing rapidly.

Take a look at this map … 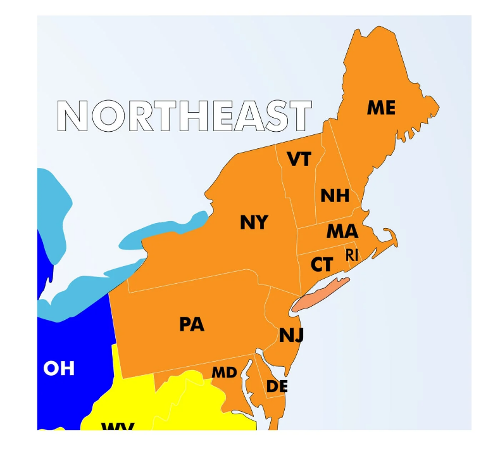 And the four that have yet to legalize recreational cannabis are expected to fall within the next three years.

Now combined, all of these states boast a combined population of about 80 million.  This is nearly 25% of the entire population of the U.S., yet this region is the smallest in the U.S. by both land mass and total area.

My point is that any analysis of potential value placed on legal markets must start with population size, not land mass and total area.

While some have trivialized the value of the new Connecticut legal market, due to its small geographical size, I see it as just one more domino that has fallen in a region that will soon represent one of the most valuable cannabis markets in the world.   And certainly, if you’re looking to get some exposure to this region, there are a number of public cannabis companies that have significant footprints here, including Curaleaf (OTCBB: CURLF), MariMed (OTCBB: MRMD), Green Thumb Industries (OTCBB: GTBIF), Truelieve (OTCBB: TCNNF), and Innovative Industrial Properties (NYSE: IIPR).

Curaleaf, MariMed and Innovative Industrial Properties are my favorite picks for this region, primarily because they’re all well-funded, and are currently trading at a discount.  This is particularly true in the case of MariMed, which is a screaming buy at these levels.

In other cannabis news, the American Medical Association published a new report showing that one in three chronic pain patients use cannabis to treat their pain instead of other pain medications, including opioids.

While it’s easy to get caught up in the excitement of new legal recreational cannabis markets, we’ve long maintained that investing in the cannabis space was a socially-responsible endeavor as this medicine has shown time and time again to be an effective substitute for highly addictive pain medications.  And the fact that the AMA is actually promoting this study shows how far we’ve come in just the past ten years.

Federally, cannabis is still prohibited, but I predict that the federal prohibition on cannabis will be fully lifted within the next three years.  Great news for sick people all across the country, and of course, great news for cannabis investors that are in it for the long-haul.