How to Manipulate Oil Prices and Get Away With It

Crude oil is perhaps the most manipulated market on the planet.

Would that surprise you?

Would that surprise anyone? I'm willing to bet if you asked 100 people if the price of oil is manipulated, you'd get 100 affirmative responses.

What's most unfortunate here is the fact that even though everyone knows oil prices are manipulated, individuals are mostly powerless to do anything about it.

The SEC defines market manipulation as “intentional conduct designed to deceive investors by controlling or artificially affecting the market for a security.” That covers a lot.

It can involve everything from directly rigging quotes to spreading false rumors. And it happens at all levels of trading, from major international banks to individual investors, every single day of the year.

Truth is, there's price manipulation happening in every single market. So it's really no surprise that the guy with his hands on the oil taps, OPEC, is into the price fixing game as well.

President Trump has criticized OPEC for manipulating oil prices dozens of times. But even the President of the United States doesn't have a voice powerful enough to stop it from playing with prices.

Just a month ago, the price of oil was increasing due to heightening fears over Iranian oil sanctions. Crude prices were over $75 per barrel. And many were even speculating on $100 oil by the end of the year, including OPEC insiders.

Then Reuters reported that a secret meeting had taken place between Russia and Saudi Arabia with the goal to boost oil production. 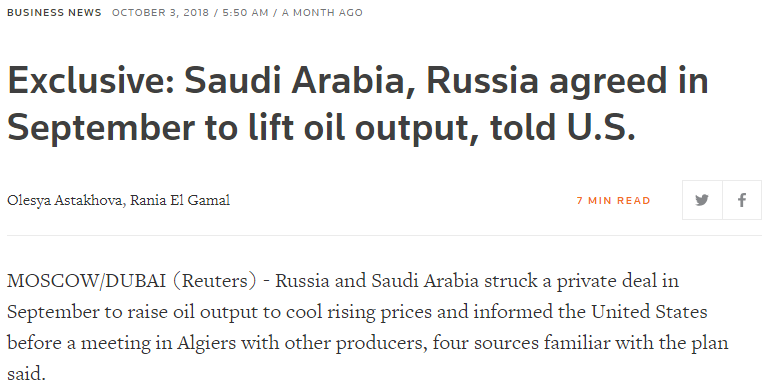 What a coincidence, huh?

The news of the “secret” meeting drove oil prices down. And they haven't recovered since. On Friday, oil prices closed around $60 per barrel.

This morning, Saudi Arabia and the rest of OPEC announced they're going to decrease production by up to a million barrels per day due to weakening demand. 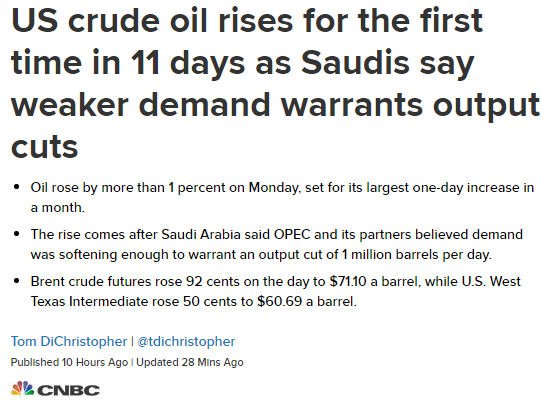 Anytime the price of oil gets too high, OPEC just comes out and says it has to increase production for one reason or another.

And when it gets too low... you got it: it's got to decrease production for one reason or another.

It doesn't even need to try to hide price manipulation very well.

Why should it? It regulates itself. And the world has become so dependent on oil that we need OPEC more than it needs us.

Unfortunately, we can't expect OPEC to just be nice, good guys that provide a vital resource at fair prices.

That means, unfortunately, it's probably better to work with OPEC rather than against it. Sure, they're cold-hearted bastards. But they've still got the world by the throat because they've got the oil.

Not to fret, however. Even OPEC knows that its moment to control a major world resource is fleeting. Former Vice President of the United Arab Emirates Rashid bin Saeed Al Maktoum famously said decades ago: “My grandfather rode a camel, my father rode a camel, I drive a Mercedes, my son drives a Land Rover, his son will drive a camel.”

All things will come into balance sooner or later.