How to Go Off-Grid for Good

Imagine throwing away every wall charger you own.

No more worrying about a low battery, a lost cable, or finding an open outlet ever again...

It’s why we talk about things like phone-sized, long-lasting hydrogen batteries and wireless pads that can charge your devices from anywhere.

Those technologies may not be ready to use for years yet, if ever.

But disconnecting from the wall forever?

That you can do right now.

Soaking in the Sun

In fact, a friend of mine has already done it!

He hasn’t touched a wall charger since the end of May, and there’s not a chance he’s ever going back.

“I haven’t felt worried about charging my phone at all,” he says. No range anxiety here!

How has he managed to keep his phone running without a charger for the past month? 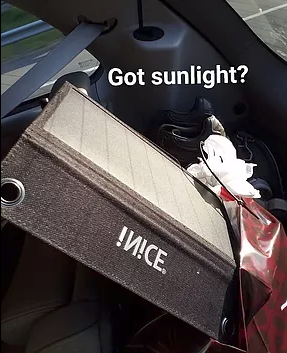 The mini-systems can be set anywhere there’s sunlight: a window, a deck, or even in the back of a car to catch some rays on long trips.

While that’s pretty damn snazzy in itself, the most interesting part of the story is where he describes how much energy he’s not using.

The panels and packs produce enough energy to power his phone for weeks (depending upon how much he’s using it), and it’s no problem for him to hook others up to the panels to share energy.

To not only have enough energy to power your own devices — completely clean energy, no less — but to have enough to share!

Of course, these panels are just powering a phone. That’s nothing compared to the energy it would take to power a laptop, a car, or an entire home.

If only we had a way to scale this idea, it may even be enough to get investors interested...

Community solar isn’t a new idea and is, in fact, becoming more popular by the day.

The systems are pretty simple: a single array of solar panels is connected to homes in the area, allowing them to reduce or even eliminate their reliance on grid electricity.

Just a few days ago, Grand Island in New York got approval to build the country’s largest single solar community project. It will come in at 4.4 megawatts, just a small part of the estimated 1.8 gigawatts of community solar still being planned in the state.

By 2020, Navigant Research estimates that the U.S. will have about 1.5 gigawatts of solar capacity in community setups like this.

Just this small section of the solar market will be worth as much as $2.5 billion by then!

Some of these larger systems even take the business a step further by offering net metering.

Net metering allows solar users to sell excess energy either to people or back to connected utilities. It’s like getting paid back for every watt of energy you don’t use!

And it can be done on any scale.

My friend could start charging people to use his panels.

Rooftop solar owners can sell the energy to neighbors or back to their utilities.

Huge amounts of solar energy can be sent across state lines to lower overall emissions.

It’s not even a matter of “if” or “when.” All of these things are happening already!

“I keep wishing for cloudy days. No pun intended, but I think that’s where solar power really shines.”

The real challenge in scaling solar, or any renewable source for that matter, is that it’s dependent on the weather to keep the power on — which means scaling grid-free solar will be 100% impossible without a healthy amount of energy storage.

And there can’t be talk of energy storage without at least mentioning Tesla Inc.

Since acquiring SolarCity last year, the company has put itself at the forefront of the solar-plus-storage industry.

It’s offering solar roof tiles to pair with its home Powerwall systems. It’s running whole businesses and, in one case, a whole island, with solar panels and large-scale Powerpack batteries.

Next up, Tesla has plans to install 100 megawatts of storage capacity in South Australia to protect as many as 30,000 homes from weather-related blackouts.

Lucky for Tesla bears and risk-averse investors in general, it’s not the only company jumping to meet this need.

AES Corp. has agreed to build its own 100MW system in Southern California. It will connect to the area’s newest natural gas generator, which is replacing several older, dirtier energy plants.

And that’s still small potatoes compared to what’s coming next...

A while back, Energy and Capital published a report calling lithium the energy source of the future.

This is what that meant.

Lithium can’t make energy on its own, but it will be absolutely essential to any kind of clean energy future you can imagine.

As a storage medium, it will end up being the source of the bulk of our energy...

We’re only just getting started.