How to Cash in on This POS Market

If you aren't making money these days, you're doing it wrong. It's time to get away from the herd and buy stocks that go up.

About nine months ago, I told my Bull and Bust Report readers to sell all of their index funds as those would take the biggest hit. 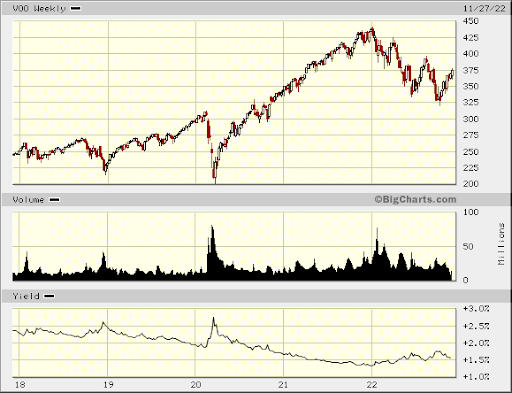 I’m not a seer and can’t tell the future, but a monkey could tell you that this chart is in a downtrend. We are at the top of that downtrend, and it is possible that the share price could break out and go higher, but I doubt it. It's more likely to go back and test that $319 low again.

If you are looking to get back into index funds, you should wait for a sell-off.

But why buy an index fund when there are better sectors that will reward your money with even more money? I am long Mexico, oil tankers, energy, and pot stocks. Here’s why.

Mexico is going to be the best-performing market over the next 10 years. The country will be the largest beneficiary of deglobalization (or at least one of them). Mexico's finance minister said more than 400 companies have contacted her about building or adding on to their factories.

Mexico has top-notch universities, a young workforce, stable leadership, and is a petroleum producer. It is a member of the USMCA free trade agreement that replaced NAFTA. Furthermore, it has low sovereign debt, and its currency has gained value against the U.S. dollar this year. Not many countries can say that.

Heck, even the Chinese are moving their facilities to Mexico to take advantage of low tariffs and cheaper shipping costs to the U.S.

I am bullish on oil tankers for a number of reasons. First off, oil that used to flow through pipelines from Russia to the EU now must go halfway around the world to China or India on tankers. Second, these stocks are extremely cheap, and many pay fat dividends. Third, the prices they charge are hitting new records.

Many of these stocks have doubled or more this year. That said, the bull market in tankers is just getting started. There is a shortage of ships that will last until at least 2024.

Energy stocks are up for obvious reasons, including a lack of investment over the past eight years. Furthermore, China just announced that it is rescinding many COVID lockdown rules, which will goose demand over the next few months. The Saudis also stated that they would adhere to their 2 million bpd production cuts announced last month. And Russia has stated it will not trade with any nations that institute a price cap on its oil products.

I’ve found a few companies that are making a lot of money from the most exciting oil story today, which is just off Guyana's shore. You can learn more about it here.

Pot stocks jumped today because the SAFE Act has the votes to pass in the Senate. This bill would allow banks to loan money to marijuana companies as well as take deposits. Furthermore, pot stocks have been absolutely killed over the past year. They are down 80% and are looking for a bounce.

I personally bought the Global X Cannabis ETF (NASDAQ: POTX) due to its high dividend yield of 7.69%. If you're looking for a sector to buy and hold for the next five years, this is it. It’s a true contrarian play.

Next week, I’ll put out my December issue of Bull and Bust Report. It will be a terrific issue with a top-notch oil tanker play that you should be able to lock in for a big gain. Insiders are buying and earnings are flying.

If you’re not making money in this market, you should be.