How the World's Tech Giants are Losing the Solar Race

Becoming Fully Renewable Is the Trend

Recently we explained how Mircosoft (NASDAQ:MSFT) has made major strides in becoming completely carbon-neutral, and how Google (NASDAQ:GOOG) has now broken into Alphabet and has its own set of renewable investments.

Now, those and other tech giants, such as Apple (NASDAQ:APPL) and Amazon (NASDAQ:AMZN), are being challenged for their places on the fully-renewable company list. And not by another big tech company—but by an airport! 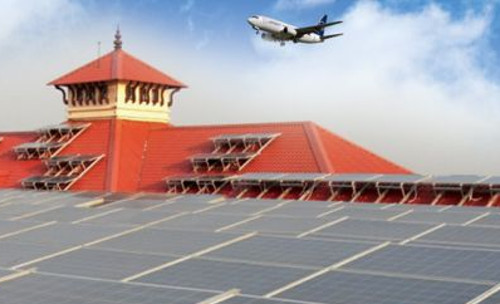 Cochin International Airport Limited (CIAL) is building an airport in the city of Cochin that will be run entirely on solar power. The building's personal solar farm will consist of 46,150 solar panels spanned over 45 acres.

The airport will be up and running by May of 2016, and is expected to save around 300,000 tons of carbon emissions over the next 25 years.

The Cochin International Airport will add to the 4 gigawatts of solar capacity India already has installed. The country is directing other airports to begin switching over to solar power as well.

CIAL is also looking to tap into more natural resources in the Cochin area by including dam-based solar panel installation and more hydropower stations.

We've reported before on India's solar power initiatives; this is just another step forward for the power impoverished country, and an example for other global clean energy movements.