When I first saw this picture, I was thoroughly impressed... 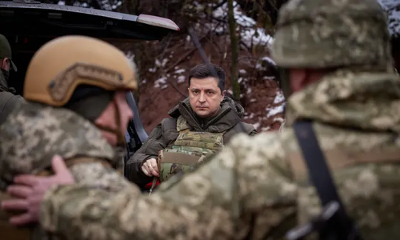 The president of Ukraine standing strong in defiance of a bloodthirsty enemy who has already called for his execution. But his thirst for freedom is so unrelenting that he refuses to flee or abandon the people who rely on him to protect their sovereign land.

Now, I don’t know much about President Volodymyr Zelenskyy, but here’s what I do know…

If the U.S. were being attacked in the same manner as Ukraine, you sure as hell wouldn’t see President Biden in a flak jacket giving the proverbial middle finger to invaders.

Biden, along with nearly every other elected official, would either be in hiding or flying off to Cancun like a little bitch escaping a winter storm.

Of course, it’s not like there will be foreign invaders in tanks rolling down the I-95 corridor, so that’s certainly not something we’d ever have to worry about. But make no mistake: Foreign invaders are already here, and they’ve already been quite successful at chipping away at the foundation of our constitutional republic.

There’s certainly evidence of this as Russia and China have been very successful using technology to instigate violent divisions amongst the people of the United States.

Sowing the seeds of disunity via social media and election tampering has proven to be quite effective at turning us against each other.

We’re all on the same team, but our team is now so divided that we have become increasingly vulnerable to defeat without our enemies even having to fire a single shot.

As penned by legendary military strategist Sun Tzu in The Art of War, “Supreme excellence consists of breaking the enemy's resistance without fighting.”

This is what China and Russia have been doing for some time now.

While we’re arguing over whether or not teachers can say the word “gay” or if billionaires should be taxed out of their billionaire status, Russia and China are actively trying to take down our critical infrastructure.

According to an analysis by the U.S. intelligence community, Russia has been making moves on our energy infrastructure since 2016 and has the ability to disrupt electricity transmission and distribution.

Millions of people lost power and more than 200 Texans died, with more than 60% of those people succumbing to hypothermia.

Now imagine that on a national scale.

Not only would thousands of people potentially die, but our elected leaders would do little more than seek to use that opportunity to blame the “other side.” Because that’s where we are now. And that’s why we’ve never been more vulnerable.

I can’t rely on my congresswoman to answer a simple question about Second Amendment rights violations, and I’m supposed to rely on her to handle a massive failure in our grid?

Of course, any attack on our grid won’t last forever.

We have plenty of systems in place that will ensure any such attacks would be short-lived, and that’s really the result of increased diversification of our energy sources over the past 10 years or so, thanks primarily to a massive increase in renewable energy integration.

Looking back at the Texas grid failure, it actually would have been worse had it not been for the state’s wind power generation.

While only 10% of Texas’ power is generated by wind during the winter and some turbines did freeze during that storm last year, the majority of power losses were tied to other sources.

One nuclear reactor went offline, as well as a number of coal-fired power plants. Natural gas, however, was the biggest source of failure, as electric pumps lost power and gas wells and pipelines froze.

As an energy investor, you know the importance of a well-diversified energy economy. And further diversification is happening right now, primarily through new wind and solar developments.

And that’s why the majority of my energy investments continue to be in solar.

Like this one, for instance, which actually pays you monthly distributions on solar power plants that are already generating electricity — and revenue. And nearly all of them deliver double-digit gains, every single month.

Make no mistake: It is the diversification of our energy economy that will allow us to effectively combat attacks on our energy infrastructure. And it will also allow you to make a lot of money in the process.