Is the Energy Investment Game Rigged?

If you think sales, earnings, and future potential are what makes a stock go up or down... you're wrong.

There are countless examples that prove this claim correct.

Normally, the men that make markets are word-renowned billionaires. We even sometimes refer to them as market-makers. And we all know who they are: Buffett, Gates, Rogers, Khosla, and so on.

Other times, politicians and other public officials can be market-makers, either independently or because of legislation they've drafted.

We've all heard about stocks that gain significant value overnight.

Why does this happen?

Most often, it's because of the words or actions of a market-maker.

Last November 3rd, Warren Buffett announced plans to acquire 100% of railroad company Burlington Northern, which was trading for $76. By the end of the day, investors had pushed the stock up to $97.00 — a gain of 28%!

Its sales hadn't increased. No new contracts were announced. And bottom-line profitability certainly didn't swell in just one day...

Investors simply thought the stock was worth more because a market-maker had spoken.

An easy gain could've been yours, had you known the move was coming.

Forget the great case for rail transport — rising oil prices, low cost per ton, the never-ending necessity to move goods around the country. The stock went up simply because Buffett bought it.

Of course, examples like this are rampant, and can be set in motion by anyone the press will listen to.

So you don't always need billions to be a market-maker. An office in Washington can work almost as well.

Public officials are also great market-makers, though their fruits often take a bit longer to harvest.

Remember the bailout of AIG in September 2008? Or the $700 billion Troubled Assets Relief Program (TARP) that followed?

No one would touch banks then.

Insolvency and credit default swaps were still the words of the day. Citibank (NYSE: C) fell all the way down to a buck — one single dollar per share.

But following the lead of Washington's market makers — Congress and then President Bush — would've netted you gains upwards of 150%.

Citi, the troubled bank that fell to $1.00, has even outperformed the Dow Jones over the past year. The numbers don't make sense, but the gains are real nonetheless: 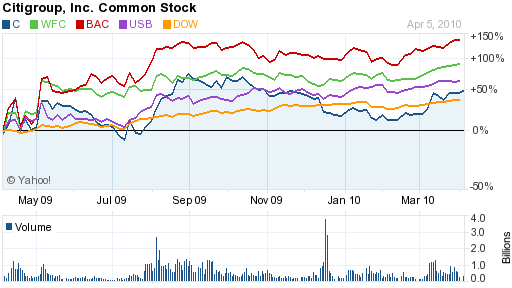 And that's only the most public example.

You should see the gains of companies that profit from politicians' decisions. Boeing (NYSE: BA) gets a new defense contract; AstraZeneca (NYSE: AZN) gets a new wonderdrug approved.

The same holds true in the energy market.

Decisions made by public officials have an impact on the public market each and every day...

A new drilling lease in the Bakken sends an oil exploration company soaring. A battery company gets a stimulus-funded cash injection.

In a recent example, Nancy Pelosi's husband bought stock in Clean Energy Fuels Corp. (NASDAQ: CLNE) valued between $50,001 and $100,000 in 2007. The company turned out to be a beneficiary of Californian legislation to clean up its ports by switching big rigs to run on natural gas. Pieces of proposed national legislation have a similar scope.

You can probably guess what happened to the stock.

The share prices of Clean Energy Fuels and Westport (NASDAQ: WPRT) — the company making the engines — have soared, thanks in part to beneficial legislation. 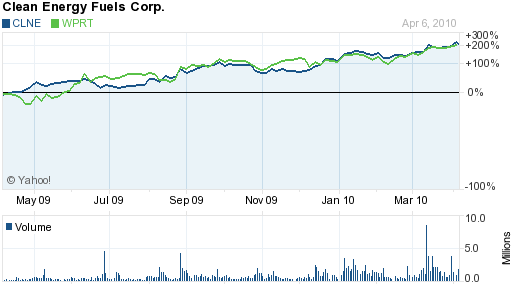 The Game is Rigged

It's easy to feel jaded when presented with information like that above. It's like a firm slap in the face from the invisible hand.

But there are plenty of ways to profit like the market-makers mentioned in this article, and even alongside them.

You could spend hours poring over Securities & Exchange Commission (SEC) fillings and reports, quarterly statements, and board meeting minutes, trying to track the moves of billionaire investors... You could diligently attend open Congressional sessions, track the tax filings of elected officials, and read hundreds of bills numbering in the thousands of pages...

Or you could be like Dave Stetson and find the market-makers operating in just one segment of the market.

An insider told Dave about an annual closed-door meeting — much like the Bilderberg Group or Buttonwood Gathering — that always has serious profit implications for energy investors.

By following this meeting, its attendees, and its outcome for several years, Dave was able to make several hundred thousand dollars in the stock market. And all he did was invest in the energy stocks that would eventually benefit from the decisions made by market-makers at an annual energy conference.

You can read the full story here — including how Dave did it, the name of the summit, and how you can follow these energy market makers to similar gains, year after year.